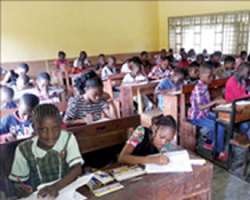 The Federal Ministry of Education's move to reduce the workload of primary and junior secondary pupils from 20 to a maximum of ten subjects under the nine-year basic educational curriculum was welcomed in most quarters as it would align our system with international paradigms.

ï¿¼However, under this scheme which was developed by the Nigerian Educational Research and Development Council (NERDC), Christian and Islamic Religious Studies, which are separately taught, will now be merged under a compulsory subject known as Religion and National Values (RNV). Other subjects brought under the RNV include Civic Education, Social Studies, and Security Education

What irks us and other well-meaning and worried Nigerians is the problem of portraying the persons, significance and teachings of Jesus Christ, the founder of the Christian faith and Prophet Mohammed, the Prophet of Islam, to our children in a way that will not cause religious upheavals in the country. A major source of the conflicts between adherents of the two religions around the world for nearly two thousand years is that they do not have a unified viewpoint on the places of these two. Secondly, the Bible and the Qur'an are not on the same page on major issues about man in this world and hereafter.

One of the most objectionable aspects of the RNV is that it forces Christian children to memorise and recite the Qur'an while Muslim children are made to study Biblical texts even in predominantly Muslim areas where exposure to Christianity is strictly forbidden in Nigeria. It also encourages children to disobey their parents if they forbid them to follow Allah.

Two prominent religious leaders, the Sultan of Sokoto, Alhaji Sa'ad Abubakar, and the Archbishop of the Catholic Archdiocese of Lagos, Alfred Adewale Martins, have condemned this move, calling on the Federal Government to maintain the separate teachings of these faiths to avoid unnecessary confusion and conflicts.

We remind the Federal Government under President Muhammadu Buhari that Nigerians have inalienable right to religious freedom. Furthermore, the Child's rights Act of 2003 preserves the right of the child not to be exposed to any religion contrary to that of his parents or guardians.

The RNV is a vain and reckless attempt to 'harmonise' Christianity and Islam, which is as impossible as mixing water with oil. It is unconstitutional, unpatriotic and unwarranted; and we vehemently oppose it.

We condemn the surreptitious moves to impose the preferred faith of some adherents  on the rest, and call on those pushing this unholy and explosive agenda to think of the grave consequences they could pose to the unity and stability of Nigeria.