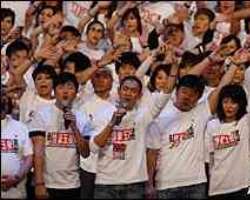 All money raised will go to the quake victims
Hollywood actor Jackie Chan has joined more than 100 stars from Hong Kong, China and Taiwain in a charity concert for the recent earthquake in China.

Chan, who visited the affected area last week, featured in a video produced for the fundraiser, which showed him living with the victims.

Actor Andy Lau said: “The quake area is located in a plateau. It's ten times worse than we thought. And the winter will come soon. It is urgent to take action.”

One week after the area was devastated by the disaster, China observed a national day of mourning for victims.

Flags flew at half mast across the country and public entertainment was curtailed as a mark of respect.