Why I dedicated a song to Linda Ikeji –Jaybaba 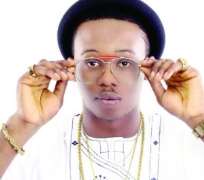 New kid on the block, Jaybaba (Okonkwo Onyebuchi Joseph), dropped his sophomore single recently. Entitled Falling for You, the track has won him rave reviews.

In this chat with Entertainer, 21 year-old Jbaba opens up on why he dedicated his debut single, entitled Linda to celebrity blog­ger, Linda Ikeji.

How did you begin your music career?
It started from a music group. My guys and I used to hang out and sing. Sometimes, we went all the way to hang out in Lekki with other up-and-coming talents. In the process we discovered we could sing. So, we were like 'why don't we just train ourselves.' So we brought in some producers and here we are today. I have been a music lover since age 14. I was in the choir in my church and sang all the way through secondary school and the university in the church choir.

Who were your influences?

That was Tuface. His style of music blew my mind! He started something new. He brought a new dimension into Nigerian music by starting the afro hip hop revolution.

How did you hook up with Evergreen Entertainment, your management?

Yeah, Evergreen Entertainment is handling my manage­ment. We met last year and pushed a song entitled Linda. Then there wasn't much finance to take it to the next level. It all began after I got a deal just to record a song from my elder brother. I met Evergreen Entertainment on twitter. I was searching for management so I got his twitter handle. He has been very encouraging. From day one we have had a natural understanding. He is like a father to me.

What is Linda, your debut single all about?

It is an afro highlife song. I was talking about Linda Ikeji the celebrity blogger. I admire her because she is so inde­pendent. I love independent girls. Too bad I wasn't fortunate enough to meet her.

What single are you promoting now?
I have just released Falling For You, and the response has been wow! I believe so much in the song; it's an afro highlife song; I call it the new sound. It is telling the girl of my dreams that whatever she wants, I am capable of delivering and I just want to be her maga.

How do you get inspira­tion to write songs?

When I hear a good beat I get inspired, and sometimes, around 1 am when every­where is quiet, I get inspira­tion as well. Also, when I listen to Tuface's songs I get inspired.

What are your challenges?
The truth is that the biggest challenge any up-and-coming artiste faces is finance. Mine was a double challenge be­cause I lost the both of my parents last year. I almost gave up but for my elder brother who was behind me. He gave me money to record a track and that track was Linda.

Are you still missing your parents?
Of course I am but life goes on. The Lord giveth and the Lord Taketh, who are we mortals to question him?

Which artistes would you want to do collabo with?

Tuface, because he is my legend. I will also like to do stuff with Davido, Olamide and Wizkid.

What are your dreams?
I want to rule the world of music. I want to win a Gram­my. I want to write my footprints in the sands of time as far as music is concerned but I know it will be a gradual process but I believe I will succeed. What I need now is aggressive promotions. - Culled from The Sun.