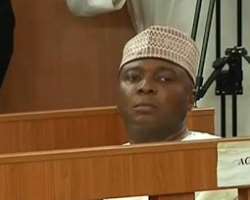 A Federal High Court in Abuja has again dismissed the application by Senate President Bukola Saraki seeking nullification of his ongoing trial at the Code of Conduct Tribunal, CCT.Mr. Saraki is standing trial for alleged false asset declaration and fraud at the CCT, since September last year.

The Senate President had approached the court, asking it to put an end to his trial at the Tribunal, describing the trial as a breach of his fundamental human rights enshrined in Section Four of the 1999 constitution and an obstruction to his duties at the National Assembly.

But in his ruling, the trial Judge, Abdul Kafarati, held that the CCT is a constitutional body, in the discharge of its legal obligation which should not be interfered with by a court of law.

Mr. Kafarati also held that the applicant’s claims that the CCT’s trial falls short of the constitutional requirements is “a sentimental claim that has no basis in law.”

“There are Criminal procedure laws that put in place the method of protecting the accused”, the judge added noting that the trial cannot be regarded as an infringement of Mr. Saraki’s right.

Since the same appeal by the applicant was dismissed by the Court of Appeal, Mr. Kafarati stated, it is inappropriate for the applicant to approach the Federal High Court seeking similar redress.

“If the court grants the application, there will be conflict with the ruling of the appellate Court

“I do not see the need to go to the merit of the case,” the judge ruled.