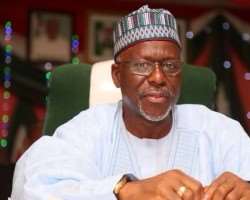 Former Governor of Kogi State, Captain Idris Wada, on Thursday tendered the original copy of his voter card before the state election petition tribunal to authenticate his candidature in the Kogi State governorship election.

Wada, who contested the November 21 governorship election on the platform of the Peoples Democratic Party, tendered the card while being led in evidence by his Counsel, Chris Uche (SAN).

Other documents tendered by the ex-governor were the total number of valid votes for the November 21, 2015 and December 5, 2015 governorship election in the state.

The documents also included a nomination form containing his profile, the nomination form for him and his running mate, Yomi Awoniyi, as PDP governorship candidates in the state.

Other documents tendered were the Independent National Electoral Commission voter registration for the state, a form bearing the name of Governor Yahaya Bello without a deputy candidate, a certificate of return for Bello as the state governor.

Also in the document tendered before the tribunal were final list of candidates published by INEC before the election.

In addition, he tendered a letter by James Faleke of the All Progressives Congress rejecting his nomination to be Bello's deputy.

The documents also included a letter containing INEC's legal experts opinion to the commission on what to do about the issue of governorship in Kogi State.

In addition, a copy of the Federal High Court judgment saying it had no jurisdiction to decide on the Kogi State governorship matter.

The News Agency of Nigeria reports that all the documents were admitted in evidence and marked as exhibits for the matter.

Meanwhile, the ex-governor had appealed to the tribunal to declare him as Kogi State governor-elect since he came second during the election after the late Abubakar Audu.

He said: “I appeal to this tribunal to declare me as the governor-elect.

“I also urge this tribunal to order the cancellation of certificate of return issued to Governor Bello or in the alternative, the election should be canceled and fresh election held.”

During cross examination by Bello's Counsel, Mahmud Magaji (SAN), Wada told the tribunal that Bello was not validly elected, saying he did not participate in the electioneering process from the beginning.

On the issue of late Audu, Wada said: “Audu died with his votes.

“Hence, he should be forgotten together with the votes.

“I had the information about the death at 9am on November 22, 2015 and as the Chief Security Officer of the state, I kept the information to myself out of shock because he was a very good friend.

“I agree that the announcement by INEC declaring the election as inconclusive was not connected with Audu's death.

“Also, I did not vote on December 5, 2015 because my polling unit was not part of 91 polling units INEC wanted the supplementary election.”

At the cross examination by Oluwarotimi Akeredolu (SAN), the APC Counsel, Wada told the tribunal that the result of the election had not been declared inconclusive as at the time of Audu's death.