Aregbesola Meets Osun Farmers On Farmstead; Says “We Are Committed To Developing Our State Through Agriculture 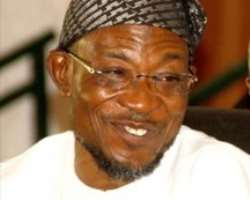 The Governor of Osun, Ogbeni Rauf Aregbesola’s campaign for massive agricultural production took another dimension Wednesday as he left the state capital, Osogbo to attend a meeting with cocoa farmers on their farmstead at Oke Osin, in Atakumosa West Local Government Area of the state.

There, he reiterated his administration's commitment to the development of agriculture‎ for the sustainability of the state economy against the reliance on proceeds from oil.

‎The Governor while addressing the members of the State Farmers Association, during the meeting, stated that government has worked its talk on agriculture by giving soft loans of about N1billion to farmers in the state.

‎Aregbesola restated that it has become necessary for people and all tiers of government to look inward on how they can improve their Internally generated revenue, saying the only way out is for government and it's people to return to the farms.

At the meeting with farmers under a cocoa plantation, he said that revenue from cocoa and other produce would help in turning the economy and fortunes of the state around if pursued with vigour‎.

He told the farmers that the essence of his meeting inside the farm was for him to see for himself how farming activities is going on in the state rather than sit in the office in Osogbo and wait for reports to come in.

Aregbesola described the notion that Osun is a civil servants state as a misnomer that must be resisted by all well-meaning Osun indigenes.

‎He noted that it will be foolhardy for‎ anybody to believe that Osun will survive with what it receives monthly from the Federal allocation which at its best ever was N5billion. He said what has been sustaining the state is agriculture.

‎The Governor held that the time has come for everybody in the state to turn to agriculture, adding that with the development of agriculture and farming, there will be plenty in the land.‎

Aregbesola said, "The essence of our visit today has nothing to do with politics or show off. We have come to have first hand information on how farming activities is going on in the state and to show that government is not just paying lip service to his commitment to the development of agriculture.

“When there was free money coming from oil, no government was looking at what agriculture could bring to the economy; we are back to the days where agriculture will be the main stay of our economy in Osun‎. As soon as we have a cabinet, most of our meetings will be held on farmlands.

“In our commitment to support subsistence and commercial farmers, we have so far granted loan close to a billion Naira to our farmers and also disbursed the needed facilities and chemicals for the development of their activities across the state.

‎
Earlier, Chairman, Farmers Field School, Mr. Timothy Akingbade commended Governor Aregbesola for keeping to the promises made to the people of the state, saying the impacts of the present administration have been greatly felt over the years.

Mr. Akingbade implored the state government not to relent in its efforts at repositioning agriculture sector, just as he assured ultimate support of farmers.

While giving analysis of the loan facilities provided for the farmers in the state, a representative of the Quick Impact Intervention Programme for Farmers, Mr. Eluyemi Arowolo, disclosed that almost N1billion has been given out as loan to farmers across the state.

Mr. Arowolo who confirmed the statement in the report issued out by the organization on the loan facilities being provided by the Bank of Agriculture, said the organization was determined to assist any farmer who is confident of what he does.

He therefore urged those who have benefited from the loans to as a matter of necessity refund it within the agreed period so as to open advantage for others.

In his remarks, the Olosin of Osin, Chief Lawrence Apata lauded Governor Aregbesola for prioritizing farmers' welfare in all his policies and programmes.

Chief Apata who described Governor Aregbesola as a lover of farmers, said in the history of the state, no government has ever paid adequate attention to farmers as being done by the present administration.

He called on the state government to continuously support farmers and provide the needful so as to enhance better participation in farming and as well boost the agricultural sector.

Chief Apata who identified social amenities as the major challenge of rural dwellers, implored Governor Aregbesola to fast track the provision of modern facilities especially mobile networks and portable water; adding that though some efforts are being made on the road sector, more needed to be done.