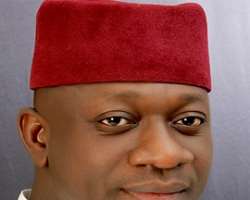 Embattled chairman Appropriation, House of Representatives, Abdulmumin Jibrin, is under fire for personally allocating over N4billion to himself in controversial 2016 budget.

Pointblanknews.com gathered that Jibrin’s, impunity and high handedness is not going down well with his colleagues.

Lawmakers in both chambers had used their whims to re allocate funds in the budget submitted by President Muhammadu Buhari.

But Jibrin s case stood out because of the amount he appropriated to himself.

As it stands, his colleagues want him to step down, while the Speaker who also benefited may have left Jibrin out to dry.

It was also observed that one item was repeated by Jibrin with different figures under the Ministry of Water Resources, which is construction of Bebeji earth dam with N270m and N50m respectively.

Jibrin a crony of Speaker Dogara, is gradually getting in the bad books of the speaker despite the illegal allocation of over N3billion to him for constituency projects.

Said a source in the Speaker’s office. ” The speaker feels uncomfortable despite what Jibrin allocated to him. The session was rowdy because members were so upset with Jibrin and Dogara. How can you allocate over N4billion to yourself with questionable projects”

Pointblanknews.com also learnt that the Speaker may sacrifice Jibrin, because even some principal officers are not happy with the scandal.

According to our findings , a cross section of members see the action of Jibrin as illegal and that it has brought public flak.

It was learnt that members queried why N3billion projects have been allocated to the Speaker and why Jibrin favoured his constituency with N4.169billion projects.

“The leadership said the N20b projects were captured under zonal intervention as it had been since 1999 but members said if others were doing it in the past, it should not be now.”

Some of the projects allocated to Jibrin’s Kiru/Bebeji Federal Constituency are:

•N100m for Town Hall
•Construction of roads in Kiru/Bebeji—N150m

Findings revealed that at the end of the day, Speaker Dogara managed to douse the tension by begging members to sheathe their swords.