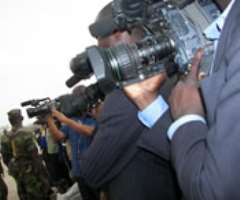 The end of the cold war rivalry between the defunct Soviet Union and the United States of America did not curtail the imperialist ambitions of western world to control the minds of the developing world and Russia through massive and slanted reportage of world affairs.

Washington and her western allies are still very steep in the mentality of journalism propaganda against Russia and Asian tigers, and that anything from such countries does not portend any good for the cultural and economic development of the world. If you are still in doubt as to the drift of this piece, the recent Panama Papers leak is the best proof yet.

According to media reports, the Panama Papers leaks were sponsored by the Organized Crime and Corruption Reporting Project and were financed by the US Agency for International Development (USAID) and American Billionaire George Soros.

The aim of the media report coordinated by the International Consortium of Investigative Journalism working with a German newspaper, Suddeutsche Zeitung and 100 other media houses was to tarnish the image of the Russian President Vladimir Putin and to direct the flow of hedge funds from Panama to United States of America which is facing a prospect of financial drought in the nearest future.

A cache of 11.5 million leaked documents of the Panama Law firm, Mossack Fonseca, that there are billions of dollars in hedge funds in Panama that is regarded tax haven. The report is causing a lot of ripples all over the world that has led to the resignation of a prime minster but fortunately, the target of the report, Putin is not implicated but his associates. This raises the issues of ethical reporting, media ownership and control.

Even though the media organs involved in this reportage may claim some measure of independence, the sources of funding put a lot of doubt on the ethical orientation of the journalists involved and this was theme worked on by the famous whistle blower and the founder of Wikileaks, Julian Assange.

The argument of Assange and other like minds is why those behind the report are still withholding parts of the materials and that it was meant to protect the interest of the American government in its policy to control the flow of funds around the globe. These are ethical issues those journalists must explain to the rest of the world if they are to come clean about this media enterprise and to convince the sceptics about their altruistic journalism aims.

Predictably, the Russian government has dismissed the report as another failed bid of Washington to control the international economic climate through her proxies and cronies around the world. The Kremlin spokesman, Dmitry Peskov lampooned the report thus: `Such ``leaks`` in our view are meant to target audiences overseas.

It is also clear that the degree of Putin phobia has reached a point where to speak well about Russia or about some of its actions and successes is impossible. One needs to speak about Russia in negative terms, the more, the better, and where there is nothing to say, you need to make it up. This is obvious to us. `

Here in Nigeria, the report implicated some top politicians, former military leaders and business men. Predictably, the media is lapping on the report without looking at the ethical implication involved and vaulting ambition of the American government to divert such hedge funds to her territory.

The role of the media as unbiased observer of events is compromised if it is seen as a puppet of some powerful economic forces. The very fact that the project was financed by the American agency and a billionaire is enough proof of the less than noble intention of the whole project.

Journalism reputation is dismissed if it is under the control of some unseen powerful military and economic forces. The western media focus on Russia and Africa is less than noble and the aim is to demonize their leaders and economic policies that do not feather the nest of western interest.

Asia, Africa and Russia are normally singled out for bad press report. This era of media imperialism and manipulation is gradually drawing to a close for some of us can see through the veil of their media reports. This piece is not an endorsement of corruption but the right and proper thing should be done.

The mass media cannot claim to carry out balanced and unbiased report if its financial lifeline is from less than noble quarters. It is true that ownership and financial control through advertisements or direct sponsorship of reports as in the case of the Panama Papers leaks do affect the reportage of news event; it is incumbent on the media practitioner to always bear in mind their ethical obligations to the society.

Unfortunately in the twisted logic of the Americans and her western allies, their economic and military interests must always be the controlling factors above fairness and objectivity. Such instances and outside interferences in the operations of the media only diminish the credibility of those journalists involved. And that is exactly the effects of the Panama Papers report not minding the cosmetic veil of combating corruption.

For us here in Nigeria, the salutary effect is that the press should hold the mirror of ethical standards to itself before it could point out the warts in the larger society. The mass media practitioners, the unelected and un-appointed members of the Fourth Estate of the Realm can truly hold those in offices accountable if their own actions are transparent and above reproach.