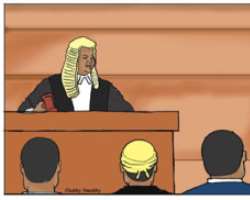 This followed a point of order moved by Rep. Nicholas Ossai (Delta-PDP), who cited the Attorney General’s instruction to the Inspector-General of Police to reopen the assembly for proceedings. Ossai described the move as unwarranted and unlawful.

In his contribution, the Majority Leader of the House, Mr. Femi Gbajabiamila, described the actions of the Attorney General as sad. He said that the resolution of the house to seal Kogi assembly was based on Section 11 of the house’s rules.

Pally Iriase, who led the chamber’s delegation to Kogi, said that the matter was not in court when the house passed a resolution to take over legislative functions of Kogi assembly as provided by the Constitution.

The Speaker of the House, Mr Yakubu Dogara, said that sensitive matters like that should be treated with seriousness.

On his part, Rep. Muhammadu Bago (Niger-APC) called for the Attorney General’s resignation, saying that he lacked the power to instruct the reopening of the assembly.

The legislators, however, resolved to summon the Inspector-General of Police and Malami to appear before their relevant committees. They also constituted a 22-member Ad hoc Committee headed by the majority leader to investigate the matter and report back in two weeks for further legislative attention.

The News Agency of Nigeria (NAN) reports that the house resumed plenary on Tuesday after two weeks recess for the Easter celebration.