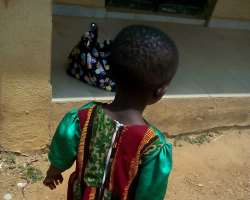 A four-year-old girl identified only as Choice, has revealed how she was allegedly raped by the proprietor of her school, Mr. Elias Oyeke.

Mr Oyeke had been having carnal knowledge of the minor severally, while often threatening the little girl, not to let anybody know about the malevolent act. She frightened the girl always, saying she will get into trouble if she informs anyone

The little girl said that 42-year-old Oyeke, who is the Proprietor of Victory International School, Mararba, Nasarawa State, raped her on several occasions and then told her not to tell anyone or she would get into trouble.

Choice, who is a nursery one pupil, said Oyeke told her that if her parents found out that she had lost her virginity, she should tell them that it was her male colleague who is also four-years-old that was responsible.

The victim said, “Uncle Elias spread my legs, covered my mouth and told me to shut up. He will put me on a chair and lap me and he will start doing it. He will then give me sweets.”

The mother of the victim, Esther, said she started suspecting something was amiss when her daughter insisted that she would not allow anyone to bathe her sometime in February.

Esther said one day, she insisted that she would bathe her and that was when she discovered severe injuries around Choice’s private parts.

She said her daughter initially lied that it was her classmate, Gabriel, that forcefully penetrated her and so she took her daughter to the school the next day.

While fighting back tears, Esther said, “I usually dropped my daughter at school around between 7am and 7.25am, before school resumed proper and I always handed her over to Mr. Elias. However, after some time, my daughter started behaving strangely as she prevented me from bathing her.

“I didn’t know that she was acting under the instructions of Elias. One day, I insisted that I must bathe her so I forced her legs open and while I was washing there, she started crying and screaming in pain.

“When her father got back, I opened her private part and saw that it was wide and very red. I knew that she could not have sustained such an injury at home so I took her to the school the next morning to confront Mr. Elias. Elias began to shake but denied knowledge of what happened.”

Esther said Elias urged her not to tell anyone so as not to tarnish the image of his school and then took them to a pharmacy.

Esther added, “On getting to the pharmacy, we were told that it was impossible for a four-year-old boy to do such damage to the girl’s private part. At the pharmacy, I kept on asking my daughter who injured her but she would just look at Elias and keep quiet.

“Then, I began to suspect that he knew something. I then took my daughter away and asked her to tell me the truth. She finally confessed that it was the school proprietor that had been raping her.

“Choice said Elias started by putting his fingers in her vagina. She said anytime it was time for break, Elias would take her to the school’s backyard, take off her pants, put her on a chair and start having sex with her. He usually gave her sweets. After doing it, he cleaned her up with a red handkerchief.”

It was learnt that the victim was subsequently taken to two hospitals where it was confirmed that she had been defiled.

A copy of the doctor’s report signed by Dr. Nwabueze Daniel of the Nyanya General Hospital, read in part, “On vaginal examination of the four-year-old girl, there is a sign of penetration as the hymen is not intact. It is a case of rape.”

The father of the victim, Pedro, who is a security guard, said he reported the matter at the Mararba Police Station.

He, however, said he was not satisfied with the manner the police handled the matter as the suspect was released on bail before he was re-arrested and taken to the State Criminal Investigation Department, Lafia.

Speaking with journalists at his Abuja office, the lawyer of the family, Mr. S. O Onoja (SAN), called on the police authorities to transfer the case to the Office of the Inspector-General of Police’s Monitoring Unit, Abuja.

Onoja said it was unfortunate that policemen could demand money from his client despite being the victim. He also urged the Nasarawa government to shut the school immediately.

“The command is aware of the case and the suspect had since been charged to court for prosecution and after which he was remanded in Lafia prison,” he added.