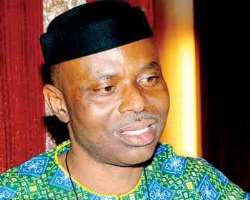 Dr. Olusegun Mimiko
The Governor of Ondo State, Dr. Olusegun Mimiko on Tuesday assessed the political situation in the country and concluded that the existence of Nigeria as a nation would depend on the success of the 2011 general elections.

The governor noted that 10 years after the return of democracy, the expectations of Nigerians were yet to be met because the nature of Nigerian politics did not allow for development.

According to him, the process of throwing up candidates must be free and fair, adding 'can we say thet the 10 years after our return to democary, we have met the aspirations of Nigeria? Today, Nigeria is 158th among 182 countries on the United Nation's Human Development Index. So the expectations of Nigerians have not been met.'

Mimiko further said, 'The life expectancy of the Nigerian is 47.7 years. Nigeria remains an oil bearing state instead of oil producing country because Shell and the rest are the real producers and they are not Nigerians. The nature of politics does not allow for development.

'Our economic model is problematic because there is a wrong political ideology. There is a nexus between democracy and national development, but the nature of our politics has not allowed this to happen. This is why Nigerian democracy has not delivered value to the people.'

The governor demanded the immediate implementation of the Justice Muhammadu Uwais panel report on electoral reform because, according to him, the survival of the country might well depend on the 2011 elections.

Mimiko, who was the guest speaker on the occasion said the Uwais panel was very creative in its recommendations.

The governor said that all election cases must be concluded before the swearing in of any candidate .

He said, 'Party sympathisers must not be planted in INEC. All cases must be concluded before anybody is sworn in. We should never allow fraudsters who got there through the wrong means to use government money to prosecute their cases.

'The psyche of the politician is that he wants to get there first and then use government agencies and resources to fight. The most deadly blow an election rigger can be dealt is to say that all cases should be concluded before anybody is sworn in.'

He argued that the view that the situation would create a vacuum was not tenable, adding that there would always be a speaker to take over the reins of government.

On comments by the former president, Chief Olusegun Obasanjo , that Ondo and Lagos should be taken over by the Peoples Democratic Party in 2011, Mimiko said it was an impossible task.

While aligning himself with the governor's position, a former president of the NBA, Chief Wole Olanipekun (SAN) said that allowing the National Judicial Council to select the chairman of INEC would not in any way encroach on the powers of the executive.

He explained that until electoral reforms were carried out in the country, Nigeria would continue to lag, noting that freeness and fairness of an election would invariably determine how the country is run.

Also, the current president NBA, Rotimi Akeredolu (SAN), who was represented by Mr. Nurudeen Ogbara, called for the establishment of strong institutions and strong men to head them.