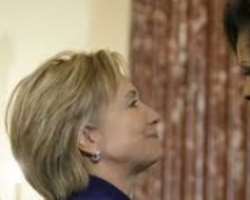 A new book claims that first lady Michelle Obama and Hillary Clinton do not get along.

According to Kate Anderson Brower, author of the new book, First Women, The Grace And Power Of America’s Modern First Ladies, Hillary and Bill Clinton have rarely been invited to stay for dinner in the Obama White House.

The author told IE: “I don’t think Michelle has not really been able to bury the hatchet after 2008. She is not a political person.”

Brower says Michelle was heartbroken when Vice President Joe Biden decided not to run for president. According to Brower, it is because Michelle wanted him to give Hillary the kind of defeat she got when she ran for president in 2008.

“Michelle Obama would stand her nose at Hillary Clinton,” Brower said. “There is a sense that the Clintons are all about money and power, and that the Obamas are about ideals and getting something done.”

Brower says Michelle is counting the days when she can pack up and move out of the White House.

The author also shares another tidbit of life in the Obama administration. The first lady's favorite show is Real Housewives of Atlanta.

The White House denies that there’s any tension at all between the Obamas and the Clintons and calls the book “unequivocally false,” insisting the two couples have a “warm relationship.”