Ranieri weeps for joy as Leicester edge closer to title 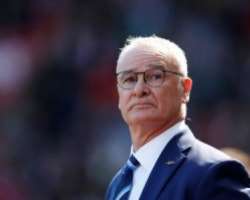 Jamie Vardy ended a six game goal drought with his 20th and 21st of the season as Leicester recorded a 2-0 away win on Sunday to stay seven points clear of Tottenham Hotspur with five games remaining.

“It’s difficult to say how I feel inside but I’m not complaining,” said Ranieri, who was in tears applauding at the final whistle.

“We got three points in a difficult, anxious match. Sunderland are very, very difficult to play against.

The emotional Italian also thanked Leicester supporters for cheering the team on to victory which left them three wins from the title. Leicester’s previous best top flight finish was second in the 1928/29 campaign

“It’s fantastic when you see before the match, an old lady with a Leicester shirt outside the stadium. I say: ‘Unbelievable. They come from Leicester to support us,’ he added.

“This is my emotion. It is fantastic. I was on the bus. I saw them, unbelievable, and I want to say thank you for the support. They are dreaming and we want to continue to dream.

“To do this we must stay concentrated. This is an amazing season for us, for our fans, for our chairman, for me, for everyone.

“Other people can continue to talk about the title. It is important we stay focused on the next match. I said this to the players.