EFCC fixes May 16 for Kalu's re-arraignment on N5.6b fruad charges 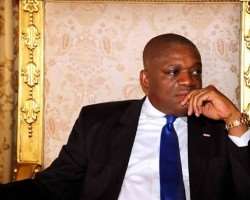 The Economic and Financial Crimes Commission (EFCC) has fixed May 16 for the re-arraignment of former governor of Abia State, Orji Uzor Kalu, and his co-accused,  on money laundering charges.

Justice Anwuli Chikere of an Abuja Federal High Court fixed the date on Monday after granting leave to the  EFCC to bring the charges and the proof of evidence.

A Federal High Court in Abuja on Monday fixed May 16 for the re-arraignment of a former governor of Abia State, Mr. Orji Uzor Kalu, his co-accused persons on charges bordering on alleged diversion of N5.6bn belonging to the state.

This followed the judgment of the Supreme Court delivered on March 18, 2016, dismissing the accused persons' objection to the charges preferred against them and directing them to submit themselves for trial.

Kalu was in 2007 arraigned  on a 96-count charge bordering on money laundering and diversion of funds valued at N5.6 billion during his tenure as governor between 1999 and 2007 alongside his company, Slok Nigeria Ltd and Jones Udeogo.

The  EFCC counsel Oluwaleke Atolagbe, at the resumed hearing on Monday,  applied for adjournment to enable the prosecution “take some steps” to bring the fresh charges.  Defence counsel, Awa Kalu (SAN) and Solo Akuma (SAN) did not oppose the application.

The anti-graft agency on February 11, 2008, amended the charges and presented fresh 112 counts against the defendants.

Their objection to the charges were dismissed by the high court, the Court of Appeal and finally by the Supreme Court on March 18.

Kalu and Udeogo, who were represented by different lawyers, were present in court on Monday.

The prosecuting counsel, Mr. Oluwaleke Atolagbe, who passed a copy of the judgment of the Supreme Court, validating the trial to the judge, Justice Anwuri Chikere, during the Monday's proceedings, said the prosecution needed time to take some steps before the re-arraignment.

“This matter is slated for mention. On March 18, 2016, the Supreme Court dismissed the appeals by the defendant.

“I will urge my lord to adjourn the case to afford the prosecution some time to take some steps. We will need about two weeks. We seek an adjournment for the defendants to take their pleas,” the counsel stated.

The judge then fixed May 16 for the re-arraignment.