Panama Papers: CISLAC call on FG to establish a Registry of all companies with the full disclosure of beneficial owners 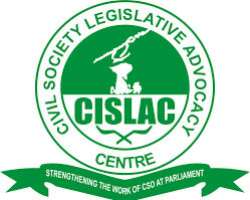 The Civil Society Legislative Advocacy Centre, CISLAC, a National Contact for Transparency International in Nigeria has reiterate the need for the Federal Government to establish a Registry of all companies with the full disclosure of beneficial owners wherever located and made available for the public to access as a means of preventing financial secrecy.

The CSO said revelations by Panama Papers have made it necessary for government address these burgeoning sources corruption.

in a statement signed by Auwal Musa (Rafsanjani) said full disclosure of beneficial owners should also become a mandatory requirement for any firm bidding for contracts in government procurement processes.

the revelations listed the names of serving Senators and their relations and other prominent Nigerians as having utilized the services of companies in Tax Havens and secrecy jurisdictions to hide assets and stow away wealth which sources are questionable and ownership suspicious.

"Tax Havens are known to provide politically exposed persons, corporate organizations and high net worth individuals with the needed secrecy to stash away proceeds of crime, corruption and tax evasion, thereby facilitating illicit financial flows and depriving countries of much needed resources to finance development."

"We are aware that these processes require time, determination and resources as demonstrated by the experiences of repatriating looted funds and bringing some suspects to trial in the face of glaring corruption and recovering funds held in foreign accounts but we urge them to be undaunted."

CISLAC however urge the Federal Government to, in addition to these, address the fundamental issues of secrecy as it relates to our institutions, by taking steps, which are directly under her control.

"It is possible for transactions and investments to be carried out by proxy using faceless Board Members, Directors and Shareholders who are able to move funds through a network of financial institutions. This is at the root of these forms of corruption and fraud, much of which is also perpetrated within our shores.

"We therefore renew our call for mandatory disclosure of Beneficial Owners of both local and foreign companies operating in every sector the Nigerian economy. A situation where the Corporate Affairs Commission and other statutory agencies are unable to provide information of actual beneficial owners of companies must be brought to an end. Similarly, a situation where actual owners of real estate and net worth properties are anonymous fuels domestic hiding of wealth and erode the tax base. Financial institutions that facilitate the transactions that allow transfers of illicit wealth to tax havens must be held liable by the relevant regulatory institutions."

CISLAC therefore call on the Federal Government to ensure that Nigeria as a major victim of Illicit Financial Flows on the continent plays a leading role and to ensure that Africa’s position is loudly expressed and incorporated into on-going global efforts to curb illicit flows and confront the activities of Tax havens. We need to make it more difficult for such acts to be perpetrated.

This includes support for the implementation of the recommendations of the High Level Panel on Illicit Financial Flows, the adoption of the EITI standards on beneficial ownership and the G8 and G20 leaders’ commitment in 2014, to increase transparency around those who ultimately own or control companies.

They called on the National Assembly to also mandate its relevant Committees to study the Panama Papers and determine the extent to which the legislature either through improved laws or better oversight can contribute to the prevention of such illicit activities.

"We call on civil society not to relent in advocacy and campaigns to ensure that beneficial ownership and other sunshine efforts that make it possible to know who has access to our common wealth are open to public knowledge".

CISLAC also call on the media to intensify the acquisition of skills for investigative journalism and all professional bodies, especially Lawyers, Accountants, Real Property Developers, Estate Valuers and Bankers to join in the campaign and demonstrate patriotism by adopting policies that ensure that their members do not collaborate with prospective clients to facilitate such.

CISLAC also called on the relevant agencies of government to undertake a thorough study of the Panama Papers to identify all Nigerians involved, conduct additional investigations to determine the extent of illegality and criminality involved, apply the full weight of the law on anyone found culpable and work in collaboration with their counterparts in the relevant countries, work to recover whatever is due to the nation for use in national development.

Sent from my BlackBerry wireless device from MTN