DIG WARNS AGAINST VIOLENCE AHEAD OF TRIBUNAL'S VERDICT 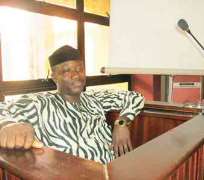 The Deputy Inspector-General of Police in charge of 'B' Department, Operations, Mr. John Ahmadu, has warned politicians in Ekiti State to restrain their thugs as the state awaits the verdict of the Election Petitions Tribunal hearing the petition of the Action Congress governorship candidate, Dr. Kayode Fayemi, against Governor Segun Oni.

The DIG, who gave the warning in an interview with journalists after his visit to the state police command headquarters, said that the police were ready to ensure that there was no breakdown of law and order before, during and after the verdict.

The warning came as speculations were rife that the tribunal would deliver the verdict before the end of the week. But the Director of Communications of the AC, Mr. Yemi Adaramodu, in a telephone interview, told our correspondent that the party had not been given any notice by the tribunal.

Although the DIG also said that the police were yet to be notified of the date of the judgment, he stated that the security agents would not be caught unawares as they were always ready.

Ahmadu said, 'We are 24-hours on the alert. We shall not condone violence or any unruly act from anybody. The police will ensure that there is no breakdown of law and order. We shall decisively deal with anybody caught trying to cause problem.

'The court is the arbiter, anybody who is not satisfied with any issue should seek redress in court. We assure all law-abiding citizens that the police will provide them with adequate security.'

The DIG, who also condoled with the family of The Nation's correspondent, Mr. Edo Ugbagwu, who was assassinated at his residence last Saturday, assured that despite the challenges of technology facing the police, the force would unveil the journalist's killers.

He explained that policing in civilised societies had gone beyond using torture to extract information from suspects.

Ahmadu said that forensic analysis of data gathered from the scene of any incident would eliminate the use of torture, an outdated means of investigation. He added that policemen were being trained to stop using torture.

Asked how long it would take the police to arrest the fleeing former Governor of Delta State, Mr. James Ibori, the DIG said that the force needed information to assist it in its effort to arrest the ex-governor.

The DIG called on Nigerians to always assist the police by volunteering useful information, which could lead to the arrest of criminals in the society.

He said that such cooperation would assist the police and it would also be beneficial to the members of the public because the society would be safer.

Earlier, he had warned the policemen in the command to desist from corruption, extra-judicial killing through 'accidental discharges' and other despicable acts.

He assured that the police would ensure an improved welfare for the officers and men of the force in order to encourage them to be more dedicated in the discharge of their duties.