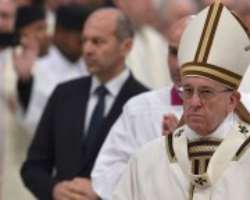 ere is hardly anyone in the world by now who is unfamiliar with the affable, down-to-earth, conspicuously humble persona projected by Pope Francis. His style of governance, however, is a far cry from this carefully cultivated public image. Influenced by the Peronist ideology of his native Argentina, he rules the Roman Catholic Church with the idiosyncratic passions, and disciplined commitment to an agenda, of a true ideologue. AndAmoris Laetitia, Francis's 260-page, nearly 60,000-word, post-synodal apostolic exhortation on marriage and family, which was at long last released on Friday, is the clearest example yet.

Francis's “People's Pope” persona has always belied an autocratic temperament that is coldly efficient at achieving his aims, if not winning allies to his cause. In his National Geographic profile of the pontiff, formerly known as Jorge Mario Bergoglio, Robert Draper relates that:

[Francis has] an awareness that his every act and syllable will be parsed for symbolic portent. Such prudence is thoroughly in keeping with the Jorge Bergoglio known by his Argentine friends, who scoff at the idea that he is guileless. They describe him as a “chess player,” one whose every day is “perfectly organized,” in which “each and every step has been thought out.” Bergoglio himself told the journalists Francesca Ambrogetti and Sergio Rubin several years ago that he seldom heeded his impulses, since “the first answer that comes to me is usually wrong.”

Robert Mickens, editor in chief of Global Pulse, an online Catholic magazine, described Francis as a “master tactician” who was able to “make a move to outflank various groups and people that continue to oppose many of his initiatives.”

The “People’s Pope” is not trying to build an inclusive Catholic Church. He’s ruthlessly making it liberal.

Such cold and calculating determination has been in evidence throughout the process leading up to Friday's publication of Amoris Laetitia. Never in my lifetime as a Catholic has a papal document been more anticipated — or feared — than this follow-up to the two-part Synod of Bishops that originally convened in October 2014. Institutionally, the document's roots can be traced back even further, at least to the consistory, or meeting of cardinals, in February 2014, at which the octogenarian Cardinal Walter Kasper, bishop emeritus of Rottenburg-Stuttgart, was personally asked by Francis to give the keynote address. It was here that Kasper — once a lightning rod of theological controversy who had already begun to fade into the obscurity of retirement — had new life suddenly breathed into his ecclesiastical career as he was lavished with praise by the unconventional new pope for his “serene theology.”

At the core of this theology was a novel conception of mercy that appeared to preclude repentance. While paying lip service to the church's long-established doctrine on the indissolubility of marriage, Kasper  proposed  the exploration of new paths to respond to the alleged deep needs of divorced people who have remarried, offering the idea of a period of penance after which they might be re-admitted to the sacraments. This “Kasper Proposal,” as it came to be known, was nothing new in his native Germany, where he had advocated it (and implemented it in practice) for years, but thrust into the spotlight of Rome it became an immediate point of contention for orthodox Catholics. It represented the possibility of an institutional embrace of adultery, as well as permission for those living in grave sin to be re-admitted to Holy Communion — a practice that had been understood previously as sacrilege. Nevertheless, it formed the locus around which both the extraordinary and ordinary synods on marriage and family would trace their orbits in October 2014 and 2015, respectively.

For his part, Kasper — with a strong papal endorsement in hand — continued to pitch the idea as he went on a world tour to promote his book Mercy: The Essence of the Gospel and the Key to Christian Life. Francis, who described Kasper early in his papacy as a “superb theologian,” said that his book “has done me so much good, so much good.” As pressure mounted against the Kasper Proposal from more conservative quarters within the church, the cardinal responded with an appeal to authority: “I agreed with the pope. I spoke twice with him. He showed himself content [with the proposal]. Now, they create this controversy. A cardinal must be close to the pope, by his side. The cardinals are the pope's cooperators.”

With no correction from the Vatican, Kasper's testimony stood, in the eyes of many of the faithful, as proof that Francis was an advocate of his position. And as the list of unorthodox prelates invited personally by Francis to the synod grew, so too did the suspicion that the pope was, in fact, entertaining the unthinkable: a blessing for changes in Catholic practice that would fatally erode the very doctrine they purported not to change.

Examples abound that the apparently simple, jovial Francis — who is so keen to refer to himself only as the “bishop of Rome,” and who gives the appearance of a strong sense of collegiality with his brother bishops — has always preferred to wield his authority like a hammer in pursuit of his own agenda. His scathing and wide-ranging rebuke of the Roman Curia, the central government of the church, in his 2014 Christmas address left feathers ruffled among the “princes of the church.” His removal of the staunchly orthodox Cardinal Raymond Burke from his position as the head of the Apostolic Signatura (and his other curial positions) was seen by many as retribution for Burke's public criticisms of the themes — like Holy Communion for the divorced and remarried — that were informing the synod process. His unilateral promulgation of two motu proprio letters reforming the marriage annulment process caused consternation among canonists and members of diocesan marriage tribunals and generated uncomfortable whispers from members of the appropriate Roman dicasteries who were not consulted in the creation of these important juridical documents. Last year, rumors of a conspiracy to force Pope Benedict XVI out of office and elect then-Cardinal Bergoglio were started by none other than Cardinal Godfried Danneels, the beleaguered archbishop emeritus of Brussels who remains a close associate of Francis, despite his track record as a promoter of heterodox ideas and protector of clerical sex abusers.

For close observers of the church, if not the wider public, Francis's ruthlessness is no secret. This aspect of the Argentinian pope's personality has already earned him his share of enemies. In an open letter to Francis from a former high-ranking member of the Roman Curia published last December, the official — who chose to remain anonymous for fear of retribution — admonished the pope for “an authoritarianism of which even the founder of your Order of Jesuits, St. Ignatius himself, would not approve.” He went on to describe the result of this authoritarianism: a “climate of fear” within the Vatican. Rumors have been circulating Rome for months that the Holy Father threatened the 13 Cardinals who sent him a letter expressing their own concerns over the synod — rumors that no source able to talk about it has been willing to confirm on the record. Francesca Chaouqui, an Italian public relations executive under investigation for leaks detailing scandalous Vatican mismanagement, went so far as to say of the pope's growing list of opponents that “many people in the Vatican want Francis dead.”

With the promulgation Friday of his new, extensive apostolic exhortation, Francis has shown once again that he is a man clever enough to get what he wants against all odds. The document's length will prohibit a comprehensive analysis for some time yet, but already Catholic progressives are celebrating its innovations, and theologians are lamenting the damage it will undoubtedly do to the already crumbling edifice of Christian marriage and the church's teaching on sexual ethics. As has been the Vatican playbook since the 1960s, the document is packed with careful language, layers of nuance, and ambiguity offering a buffer against cries of “heresy.” At the same time, these openly semantic doors offer opportunities for exploitation by means of subjective “discernment” by those who have most longed to see the church change its teachings to “get with the times.”

In his own words from the text of the exhortation, Francis advises that we “recall that this discernment is dynamic; it must remain ever open to new stages of growth and to new decisions which can enable the ideal to be more fully realized.” Like much else about this papacy, it's a statement that could mean whatever one wants it to mean. The real agenda lies hidden beneath.