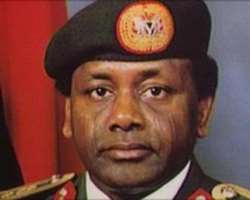 By Dele Sobowale
'Justice Mohammad Idris of a Federal High Court in Lagos has ordered President Muhammadu Buhari to hold all successive administrations since the return to civil rule in 1999 to account on the spending of the recovered loot' - a national newspaper.

Are you aware that in addition to the four refineries in Nigeria - Port Harcourt I and II, Warri and Kaduna, this country also had a 30 per cent interest in West African Refinery, Sierra Leone which was handed over to President Obasanjo's government in 1999? Are you also aware that has Obasanjo so far failed to account for that national assets and its disposal, he was handed a list of assets forfeited by Abacha to the Federal Government on May 26, 1999 - in the last decree -Decree No. 53 - which was the last signed by General Abdulsalami Abubakar as Head of State, Commander-In-Chief of the Armed Forces, Federal Republic of Nigeria? Are you also aware that other Abacha loot, returned between 1999 and May 2007, when Obasanjo was forced to step aside, remain unaccounted for and might have been re-looted? Prepare yourself for a shock - if it is still possible to be shocked in Nigeria by anything done by leaders of the PDP who had access to the corridors of power - especially the self-righteous Obasanjo. His administration established the template for looting Abacha loot. But, permit first a diversion - a necessary one.

Obasanjo had since made a caustic comment about the court order. He called Justice Idris 'stupid' for daring to ask Buhari to ask Obasanjo to account for OUR money and other assets. That shows Obasanjo in his true colours. A honest man if asked to account for other peoples property which he held in trust does not resort to abuse. He would open the records for all to see that he had integrity. But, not Obasanjo. It is in his character. Back on April 8, 2012, three individuals who knew Baba Iyabo better than most Nigerians had the following to say about the man.

First, former Senate President Ken Nnamani: 'He personally authorized the disbursement of N50m each for 109 Senators, as well as other sums of money, which amounted to an excess of N8bn to pass the third term bill into law.'

After running down the EFCC on that day, Obasanjo heaped praises on the EFCC under his own administration and its Chairman, Malam Nuhu Ribadu. It is quite understandable that Obasanjo should be happy with Ribadu who, unknown to most people who still heap praises on him was mostly incompetent and might have committed treason. He was also Obasanjo's protector; he averted his gaze from obvious misdeeds of Obasanjo, supported the third term agenda and hoped to be rewarded with his own second term in office. Before presenting the charges against Ribadu, there is need to continue the list of Abacha family loot forfeited under Decree No 53 of May 1999 and which were handed over to Obasanjo's government by General Abubakar.

Altogether, even before Obasanjo got into Aso Rock, at least N30-50bn Abacha loot was waiting for him and till today he has not accounted for them. Unfortunately for Nigerians, those were not the only Abacha loot for which Obasanjo had not accounted. There are many more than can be listed here. Let us now list some of the Abacha loot collected when Malam Nuhu Ribadu was Chairman. Please bear in mind when reading that the amounts to be quoted represent Abacha loot collected between 2004 and 2007 ONLY. Then, you would understand why Obasanjo loves Nuhu Ribadu who was a compromised bulldog. He never investigated what happened to those funds.

Permit me at this point to acknowledge the contribution of Sonala Olumhense, in providing some of these figures. The entire list of Abacha loot recoveries will appear in volume two of PDP: CORRUPTION INCORPORATED. However, it will be necessary to bring in three other highly placed, formerly well-respected officials of that administration whose roles might not have been patriotic - Dr Ngozi Okonjo-Iweala, Mrs Nenadi Usman and Professor Charles Soludo - Ministers of Finance and Governor of Central Bank respectively. Those three will need to tell us what happened to the loot recovered. For Okonjo-Iweala and Usman, their involvement in Jonathan's mess represents the second time they would serve Nigeria badly by collaborating with presidents.

In August 2004 the Swiss government decided to return $500million [N65bn] of Abacha loot to Nigeria. A little over a year after Okonjo-Iweala announces that Nigeria has recovered $458million [N59.54bn] and about $2bn [N260bn] total assets.

In March 2007 Finance Minister said $2.5 billion recorvered funds were given to five Ministries - without the approval of the National Assembly and without being paid into the Federation Account to be shared by all three tiers of government. The Federal government was deliberately robbing the states and local governments under Obasanjo. Yet Nuhu Ribadu, Obasanjo's favourite bulldog, saw nothing. In the June of 2007 Okonjo-Iweala disclosed at a lecture that between $3 and 5 billion was looted by Abacha in truckloads, with Chief Anthony Ani as CBN Governor.

To confirm what Okonjo-Iweala said, Obasanjo himself, during the campaigns for Presidential elections in 2007 had declared that the EFCC under Ribadu had recovered $5bn [N650bn then]. That prompted me to ask in an article published in NATIONAL LIFE, 'Where is the loot?' It is noteworthy that until they left office, neither Obasanjo nor Ribadu accounted for the $5 billion recovered. Incidentally, the looting of the Petroleum Development Trust Fund, PDTF, by Obasanjo's government, which was roundly condemned by a Senate Committee established to probe that account, was also glossed over by Ribadu. [See PDP: CORRUPTION INCORPORATED, Chapter 6 for a fuller account of how PDTF was raided]. The book had been in circulation for close to eight years and Obasanjo had not dared to challenge the accusations. He knows the truth; even if he pretends. And Ribadu as EFCC Chairman was a disgrace on these matters. Show me your admirers and I will tell you who you are. Obasanjo called Justice Idris 'stupid' for asking for the account knowing the man cannot reply. I will do it for Justice Idris. Obasanjo, for failing to disclose how he spent over N650 billion Abacha loot, is dishonest. - Culled from Vanguard.