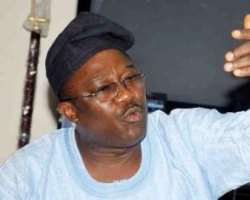 Senator Smart Adeyemi, on Friday formally defected to the All Progressives Congress, APC.

Adeyemi was of the Peoples Democratic Party until his defection.

Adeyemi represented the people of Kogi West Senatorial district in the National Assembly during the 6th and 7th Assemblies on the platform of the Peoples Democratic Party (PDP).

He was defeated in the last general election in his bid to return to the Senate by Senator Dino Melaye in last year’s election for the Kogi West Senatorial seat.

Adeyemi, a former Chairman of the Senate Committee on the Federal Capital Territory had before then attended a few functions of the APC alongside chieftains of the party.

Adeyemi, while briefing journalists in Abuja said " the APC-led government has shown in less than a year in office that it has the capacity to lead the country to the Promise Land, urging Nigerians to support it."

He explained that his decision to join the ruling party was to support President Muhammadu Buhari’s determination to develop every part of the country, particularly his Kogi West constituency.

The politician, who was accompanied by political leaders from Kogi State and associates from other parts of the country during the press briefing including Senators Abu Ibrahim and Olubunmi Adetunmbi among others, said he had no regret dumping the PDP.