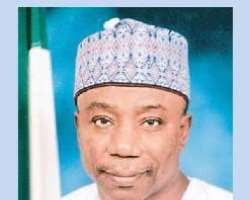 Former minister of Federal Capital Territory Abuja in the person of Adamu Aliero following the dissolution of the Federal Executive Council [FEC] has become the center-point for several of the anti-corruption outfits of the federal government. This is as new revelations of the near financial crimes committed by the former FCT minister while he held sway as the governor of Kebbi State has begun to spill into the public arena. Documentary evidence in the possession of ukpakareports.com show the financial crimes committed by Adamu Aliero's administration in the supply of hospital equipment and the associated transfer of funds.

The plot to siphon N641million out of the Kebbi State treasury began with a letter authored by the commissioner of health, Alhaji Ibrahim Mai'ahu to Abdullahi Brothers Company [ABC] Nigeria Limited dated November 6th 2001 with reference MOH/HPL/72/Vol.1/P11 and captioned Letter of Intent for the supply and installation of equipment for 2x50 bed general hospital. Of which, in February 4th 2002, ABC Nigeria Limited replied the said letter of intent. The letter was addressed to the Governor of Kebbi State [Adamu Aliero]. And Replying directly to ABC Nigeria Limited, the governor directed for the health commissioner to discuss the immediate implementation of the contract award with the finance commissioner. To this end, officials of both ministries met with officials of ABC Nigeria Limited on June 7th 2002 as directed. This was reflected in a June 7th 2002 letter written by the managing director of ABC Nigeria Limited [Alhaji A. B. Umar] to the health commissioner. [See letter]

ABC Nigeria Limited had offered to supply Kebbi State with hospital equipments worth N418million. The contract was to be pre-financed by Reliance Bank at the interest rate of 28% per annum. The money was to be paid in 28 repayments with 28 consecutive months. The contractor would receive N15million each month until the total amount was liquidated. This would bring the total payment to N420million. The formalization of the contract was accented to by the Governor on July11th 2002. This was reflected in the governor's approval to a letter written by the finance commissioner requesting for a formal approval of the proposal by ABC Nigeria Limited. The letter was dated July 9th 2002. [See letter]

With ten [10] months following the formalization of the contract and the payment plans, on May 19th 2003, ABC Nigeria Limited drafted another letter directly to the governor requesting for a variation in the contract due to exchange rate fluctuations. The contractor claimed to have delivered 90% of the equipments – while demanding an additional N70,557,162.50. Responding, the governor minuted directly to the Chairman, State Tenders Board on June 3rd 2003. The Chairman, acting upon the governor's instruction, issued a letter of award of contract as an addendum for the supply of medical equipments to cover the N70.5million requested by the contractor. A voucher was thereafter raised to pay the amount to the contractor. [See contractor's letter with governor's approval, and Tenders Board voucher].

Three weeks prior to the request for variance [April 30th 2003], a highly suspicious transfer of funds was made from the ministry of finance to the contractor and from the contractor to the private account of the accountant general.

On April 30th 2003, the permanent secretary for finance ministry [Muhammad Santango] in cohorts with the accountant general [Sani I. Gwandu] directed the manager of Afribank in Birnin Kebbi to transfer the sum of N150million to ABC Nigeria Limited account number 030-155230-01-1-03 with Standard Trust Bank Birnin Kebbi. The N150million was to be drawn from local government joint account deposit account. It was indicated that the transfer was made in respect of ABC Nigeria Limited for the supply of medical equipments. [see letter]

Between September and October 2003, two unusual deposits were made by ABC Nigeria Limited into the personal account of the State Accountant General totaling N90million. One was in September 24th 2003 for N80million and the other in October 21st 2003 for N10million. This was according to deposit slip. [see both deposit slips]

Interestingly, in ABC's request for variation, they claimed that their “original quotation dated 8.8.2002” was based on an exchange rate of N113/$1 which was prevailing in December 2001. But the figure of N418million proposed by the company and later approved in July 2002 does not agree with the claim that the original quotation was made in August 2002. Thus raising the question as to why a quotation submitted in August 2002 use December 2001 exchange rate instead of the rate prevailing in August 2002. It also raises the question as to why the initial proposal for the contract involved both the client ministry [ministry of health] and the ministry of finance only to be excluded when the contractor wanted to be paid an additional N70.5million. The contractor wrote directly to the governor and the governor minuted directly to the State Tender Board without involving the health commissioner.

Another misnomer was observed in the prevailing contract agreement for a monthly payment of N15million to the contractor when unexpectedly a payment of N150million was authorized to the contractor for the same contract. But this time, the money was to be drawn from the local government joint deposit account. Also, with the terms of payment for the contract was spread over a 28-month period, it remains puzzling why the N70.5million variation was not built in the main contract.