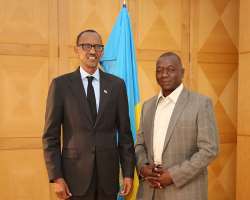 In 1994, the world was shocked with the killings in Rwanda between the Hutus and the Tustin in a war of hate aggregated by political misgivings claiming over one million lives. 22 years after the crisis, the unfortunate event is still fresh in the memory of the East African Country.

In fact, the historic genocide is believed to be about the worst in human history. To most people outside Rwanda, the word “Kwibuka“ literally means “remember”, but to the average Rwandan citizen, it goes beyond this literally meaning to connote a sense of grief. Indeed, it is the official word used to describe the launch of the 1994 genocide ; those days of darkness and sheer horror in Rwanda.

The yearly remembrance is often used as a forum to learn about Rwandan remarkable story of reconciliation and nation building. This year was no different as the country marked the 22nd commemoration of the event yesterday, April 7th 2016 with the theme: Fighting Genocide Ideology.

In Nigeria, the Rwanda High Commission held an event at Protea Hotel Abuja to engage Nigerians and the Diplomatic community in remembering those lives that where lost, show solidarity and unity to ensure it never happens again in Rwanda or elsewhere.

At the event, the High Commissioner of Rwanda to Nigeria; Amb. Stanislas Kamanzi explained why this year’s commemoration is centered on Fighting Genocide Ideology. According to him, “Like every theme proposed in the last years, this one also was not taken out of mere fortuity. Primarily, it emerged out of a sense of responsibility for Rwanda to echo a constant call towards the International Community to rise and converge against the trivialization of the ideology of genocide, and in view of wary repetitive developments we have been witnessing, whereby the genocide perpetrators and their cronies have been parading in total impunity, eagerness to pursue their evil agenda under the umbrella of associations harbored in various countries across the world”.

Recalling the United Nations General Assembly’s unanimous adoption of a resolution A/RES/58/234 designating 7th April, the start date of the 1994 genocide in Rwanda, as the International Day of Reflection on the Genocide in Rwanda; Amb. Stanislas noted that it is not only about Rwanda, but about humanity, a noble course which all nations should aspire to, ridding our world of the shameful ideology of genocide.

Also, the Minister of Foreign Affairs, Nigeria; Mr. Geoffrey Onyeama, on behalf of the Government and People of Nigeria extolled the Government and people of Rwanda for setting unity standards several years after the Genocide. He recounted how Nigeria stood by the people of Rwanda in upholding a strong stand against the government that planned and perpetrated the Genocide, which afforded unreserved support to the government that had stopped the genocide, in the daunting process of rebuilding the country and national reconciliation.

The event among other things, included the lighting of the ‘Urumuri Rutazima ‘ (Kwibuka flame), symbolizing remembrance as well as the resilience and courage of Rwandans over the past 22 years. Most importantly, the numerous guests at the event, made up of diplomats, top Nigerian government officials t, and friends of Rwanda shared in Rwanda’s story of hope as the country has stood together in the face of adversity to build a new society.