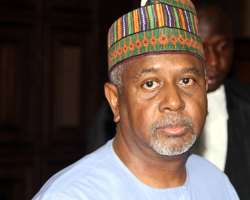 The Community Court of Justice, Economic Community of West African States (ECOWAS), says it will on April 11 rule on whether it has the jurisdiction to entertain a case brought before it by the former National Security Adviser, Col. Sambo Dasuki.

This is contained in a statement issued by the court in Abuja on Thursday.

The case filed with the suit number ECW/CCJ/APP/01/16 was brought before the Court on Nov. 5, 2015, against the Federal Government.

Nigerian prosecutors on September 1, 2015 slapped a charge of unlawful possession of arms against Dasuki.

Dasuki was arraigned on a 'one-count charge of being in possession of firearms without licence,' Prosecutor Mohammed Diri told the federal high court in Abuja.

According to the statement, the court's decision to rule on the case followed a preliminary objection by the counsel to the defendant, Mr T. A. Gadzali. In the objection raised, Gadzali urged the court not to hear the substantive suit filed by the applicant as the subject of the suit was based on contempt of the order of Nigerian courts.

He added that the only remedy was for the plaintiff to return to the country's court to commit the government for contempt.

The counsel to the defendant also argued that a similar case was already pending before a Nigerian court and could not therefore be entertained by the ECOWAS Court.

In response, counsel to the plaintiff, Mr. Robert Emukpoeruo, stated that a suit could not only be filed before the ECOWAS Court if it were pending before an international court. Emukpoeruo added that the suit was not founded on contempt but on the defendant's abuse of the applicant's human rights.

The applicant, in the suit filed, asked for N500 million as 'compensatory damages' against the government of Nigeria. 'This is over his continued detention without charge, invasion of his residence and seizure of his property despite being granted bail by courts of competent jurisdiction.'

The plaintiff, in the suit, also sought a declaration that his continued detention, refusal to allow him travel for medical treatment and seizure of his properties constitute a violation of his human rights. 'This is as guaranteed under the country's constitution' and various international instruments to which the country is signatory,' it stated. (NAN) Vanguard