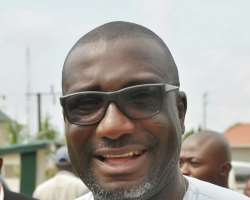 The Chairman, Rivers State Chapter of the Peoples Democratic Party, PDP, Bro Felix Obuah says there is no truth in Mr. Rotimi Ameachi’sstatement, describing the Rivers State Governor, Chief Nyesom Wike, as a threat to democracy in the country.

The PDP Chairman notes that former Governor Ameachi is only struggling to divert attention from his abominable atrocities, rebellious activities and breach of public peace and security in the State and the nation at large, stressing that it is he (Ameachi) that has become a threat to democracy and peace in the country.

He expressed disappointment that rather than help President Buhari to proffer solution to the numerous problems on his head, particularly the deteriorating economic situation and apparent lack of focus of the APC-led government in the country, Mr. Amaechi is busy blackmailing a focused and development-sensitive Governor (Wike), and causing trouble in Rivers State.

Bro Obuah emphasized that Amaechi’s statement was undoubtedly a cover- up, distraction and attempt to subvert the truth about who he is and what his activities in the State portend, recalling how Amaechi flooded the State during the re-run elections with soldiers to rig the election, kill innocent voters and intimidate the citizens while exercising their franchise.

Rather than admitting his failure as a governor for eight years and ill- preparedness for his new office as Minister for Transportation, Mr. Amaechi has resorted to pulling down the good foundation of the Wike administration, a mission and task he cannot accomplish.

Bro Obuah is therefore calling on the former governor to settle down for business as a minister and allow the peace in Rivers State to be, reiterating his earlier appeal to President Buhari to call him (Amaechi) to order, before he completely destroys the already rough image of his government.

The PDP chairman also urges the people to ignore Amaechi’s lies and deceitful claims, adding that nothing good and meaningful can ever come from Amaechi who failed as a governor, and APC leader in the State, as he could not deliver his party at the polls, failing even in his polling unit.