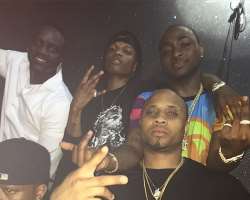 BEVERLY HILLS, April 04, (THEWILL) – OBO, Davido jetted out to Brazzaville, Congo on Saturday alongside his HKN Gang for a mega concert at the Stade de la Concorde a Kintele, arranged by international music star, Akon to promote his Lighting Africa Project.

Wizkid who has also been touring some African countries joined the party.

Upon his arrival in Brazzaville, an avid Davido fan couldn't contain his joy as he wept with joy upon meeting his music icon. Davido shared a clip of the fan on his knees while he tried to calm him down. He also gave the awed fan a hug which no doubt made his 2016!

Check out more photos of Davido and his gang in Congo below!