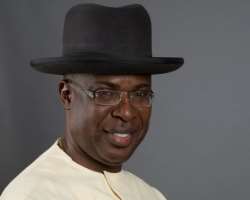 Former, a former governor of Bayelsa State who had a failed bid to return to his former seat in the last governorship election in the state, .

was  following allegation suspended following the allegation that the minister of state for agriculture, Senator Heineken Lokpobiri,  bribed him to secure his ministerial nomination.

Accarding to a report in Vanguard,  the chairman of APC in Bayelsa, Timipa Tiwei Orunimighe and the secretary, Daniel Marlin announced the suspension of Sylva on Saturday, April 2 in Abuja.

Timi Frank who is the deputy national secretary of the APC said on Thursday, March 31 that the APC should investigate the allegation of bribery brought upon Sylva and suspend him if guilty.

He had said,  “Today I am a very happy man because when I came out before the governorship election in Bayelsa to say that Timipre Sylva cannot do the job for the second time in Bayelsa because he was not liked by the people and was very unpopular at that time, nobody took me seriously, including the leadership of the party in Bayelsa state at that time. But today, I am happy and I am thanking God that he has shown Nigerians what I knew then.

“It is a total disgrace if our party cannot act or investigate this allegation and just allow it to go under the carpet without taking action on it. Nigerians and the opposition party are waiting to see what we are going to do.

“I call on the state party executive to immediately suspend the former governor from the party, while we should go into investigation because if they don't suspend him, he is going to stall the investigation.”