24 die in India bridge collapse, 90 pulled out in all-night rescue 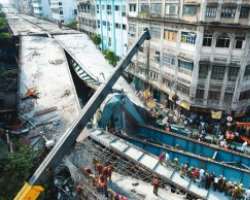 At least 24 people have died in Kolkata and 75 have been injured in the collapse on Thursday of a flyover under construction in a crowded commercial area. Rescuers worked through the night with cranes, saws and jackhammers to look for those trapped in debris.

The state government has ordered a high-level probe into the incident.

Fifteen of the dead were identified while the identification process of the rest were on, police said.

The injured were rushed to hospitals in the vicinity.

Two policemen, injured in the collapse were discharged, while Sandip Haldar, a sergeant of Jorabagan traffic guard, was still reported to be critical.

West Bengal chief minister Mamata Banerjee , camping at the site, said “it is not the time to play politics. Rather we should work for the rescue and relief of the injured.”

Banerjee later visited Calcutta Medical College and Hospital and inquired about the condition of the injured.

She said 17 injured were being treated at the hospital while the rest had been discharged. Of the 17, condition of two were critical, while three bodies were still trapped in the debris and would have to be extricated with the help of gas cutters, she said.

The CM, who cut short her election campaign to reach the site, said rescue operations will go on until the roads were cleared.

In a related development, Kolkata Police registered a case against the Hyderabad-based construction firm IVRCL under sections 304, 308 and 407 of the IPC and sealed the local office of company engaged in the flyover’s construction.

“ It is nothing but God’s act ,” claimed Panduranga Rao of IVRCL, drawing all-round flak.

Chief secretary Basudeb Banerjee said that a high-level inquiry has been ordered into the flyover collapse.

Meanwhile city police Commissioner Rajeev Kumar handed over a report about the incident to the chief minister.

Five columns of Army personnel (about 300 in number) along with NDRF, state disaster management, city police and fire brigade personnel are involved in the rescue operations.

West Bengal governor KN Tripathi, who visited the spot, sought a report of the incident from the state government.

Prime Minister Narendra Modi spoke to West Bengal chief minister Mamata Banerjee about the situation arising out of the collapse.

PM Modi, who is away in Washington, expressed grief over the tragedy and assured all possible support to the state government from the Centre, an official release said

Here are 10 developments in the story: