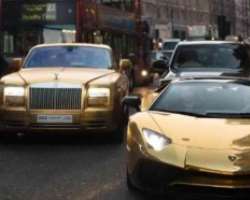 Gold cars have lined the streets of London.
The vehicles, including two Lamborghini supercars and a Rolls-Royce, are believed to be owned by a visiting Saudi man.

The four luxury cars have an estimated total value of more than $2.35 million.

The local council in Kensington and Chelsea has introduced its own fined for motorists revving their engines, racing, and performing stunts after a number of complaints from residents in the wealthy area.