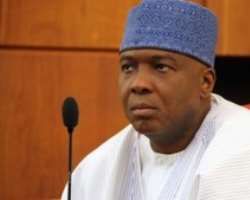 There are fresh indications that the Peoples Democratic Party members in the upper chamber have perfected strategies to produce a successor to Senator Bukola Saraki as Senate President if he is removed as a result of his trial at the Code of Conduct Tribunal, The PUNCH reports.

But the newspaper further reports that All Progressives Congress senators have vowed to resist any attempt by their PDP colleagues to take over the red chamber from them.

According to the report,   the PDP senators met for several hours on Monday night to take a final decision on the issue.

It was not clear whether the current Deputy Senate President, Ike Ekweremadu, would be allowed to take over the top Senate seat.

The paper reports further,
A source at the meeting claimed that some people were of the opinion that Ekweremadu should resign alongside Saraki as a sacrifice while an APC senator from the North-Central would emerge as the deputy.

Confirming the development to journalists on Wednesday, the Chairman, Senate Committee on Niger Delta Affairs, Senator Peter Nwaboshi, said the PDP would produce the next Senate President.

He said, “Should the incumbent, Senator Abubakar Bukola Saraki, is forced to vacate the office, we have perfected necessary arrangements to take over the upper chamber.”

He said the PDP was ready to replicate the current system in the United States of America, where the Republicans are in charge of the parliament, while the Democrats are in control of the executive.

He said, “Well, I wish the APC the best of luck if they are on a wild goose chase. But I want you to mark what I am saying. I was the first to address the press in Port Harcourt and I told them that Saraki was going to win the Senate Presidency and I gave them my reasons.

“Then, nobody ever thought that Saraki was going to win. People were saying that APC had decided. But it was clear to me that he was going to win and I had to address the press. Eventually, we went there, he won. If, but God forbids, because we don't see it coming, by chance, Saraki is removed, I can tell you that the PDP will produce the next Senate President.”

Speaking on how the PDP intends to get the support of other lawmakers to produce the next Senate President, Nwaoboshi said, “We only need three and we have them.”

“If anybody is thinking that a PDP man is going to vote against a PDP candidate, he is telling you a lie. We have people and we know how to get the people from the APC. We will win and that will be very interesting. What is happening in America is going to happen in Nigeria. America has a Republican Senate but the executive is led by Democrats.

“In any case, my party, the PDP, we have resolved in our meeting to support him (Saraki). So, there is no basis for him to resign.”

However, senators, elected on the platform of the APC, are not taking the plot of their PDP colleagues lightly as they held a meeting last week in the house of a former Sokoto State Governor, Senator Aliyu Wammako, in Abuja.

Although the meeting was initially said to have been called with a motive to get all Senators of the APC to unite behind Saraki, it was later learnt that senators at the meeting were more concerned about the embarrassment disunity was causing the ruling party in the Senate.

According to sources close to the meeting, the lawmakers wanted a situation in which the interests of government would be promoted at all times in the Senate.

The meeting was said to have resolved to work in the interest of the party to ensure that the opposition party never had its way on any matter.

But the APC was sharply divided in the Senate along the lines of those supporting the Senate President and those against him.

The unity forum senators had worked against Saraki after he emerged the Senate President in a controversial election but the like-minded senators were on his side.

Spokesperson for the SUF, Senator Kabir Marafa, confirmed that the two factions of the APC in the Senate met last week to close ranks and resist any attempt by the PDP to call the shots in the red chamber.

He said, “We sat for four days last week, brainstormed, agreed and at the end of the day, we came out with a three-point agenda. We felt if they are agreed upon, the APC caucus in the National Assembly can become one.

“Number one issue is the illegality of our committees. We said we must constitute the committees in tune with the Standing Orders of the Senate. Number two is that the APC members, especially the Unity Forum elements, who are marginalised in the formation of the committees, should be accommodated.

“Number three is the issue of leadership and how it affects our party.

“President Muhammadu Buhari talked about party supremacy and how we must obey. These are the three issues that were deliberated upon.

“Number one item in the list was agreed upon. We agreed that we will amend the rules to accommodate all committees of the Senate. Number two on the agenda was also agreed upon; that is the issue of committees, with a view to giving our party members what they deserve.

“We have a government in place and we are senators elected with that government. We are under the same canopy. We have a moral duty to support our government, President and our party.”