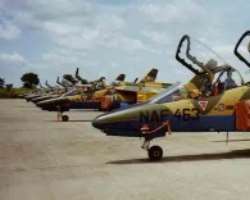 The Nigerian Air Force on Wednesday signed a Memorandum of Understanding,(MoU) with Innoson Vehicle Manufacturing Company, IVM, Nnewi, Anambra state for research and production of spare parts for its fighter jets.

The Chief of Air Staff, Air Marshal Sadique Abubakar,who disclosed this to newsmen in Nnewi, Anambra State, stated that the collaboration between the company and the Air Force had kept its jet fleet running for months now.

Abubakar, though was represented by the Chief of Policy and Planning, Air Vice-Marshal James Gbum, said the MoU would further solidify the collaboration, improve local content and engineering as well as save the country a lot of foreign exchange used in importing the expensive parts.

In his words: “Our war efforts will be in vain if we don't do something to ensure we get spare parts because some of our fighter aircrafts that have formed the back-bone of our struggle against Boko Haram, were once down due to lack of spare parts and mainly the break assemblies of these aircrafts.

“The Air Chief immediately ordered our research and development cell in Kaji to start to research into this break assembly overhaul. They went ahead and carried out the research. However, the first proto-type they brought couldn't pass the test.