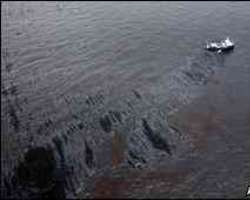 Robotic submersibles are being used to try to stop a fast-flowing oil leak nearly a mile (1.5km) below the surface in the Gulf of Mexico.

Some 1,000 barrels (42,000 gallons) of oil a day are spewing from a damaged well, after a drilling rig exploded and sank off the Louisiana coast last week.

British oil company BP, which leased the rig, said the “first-of-its-kind” attempt would take 24 to 36 hours.

There are fears of an environmental disaster if the mission fails.

Conservation experts say the oil leak has the potential to damage beaches, barrier islands and wetlands across the coastline.

For now, the weather conditions are keeping the oil away from the coastline and it is hoped the waves will break up the heavy crude oil, allowing it to harden and sink back to the ocean floor.

'Very serious'
BP is using submersible vehicles, equipped with cameras and remote-controlled arms, to try to activate a blow-out preventer – a series of pipes and valves that could stop the leak.

OIL SPILL DISASTERS
1991: 520m gallons were deliberately released from Iraqi oil tankers during the first Gulf War to impede the US invasion

1979: 140m gallons were spilt over nine months after a well blow-out in the Bay of Campeche off Mexico's coast

1979: 90m gallons leaked from a Greek oil tanker after it collided with another ship off the coast of Trinidad

1983: 80m gallons leaked into the Persian Gulf over several months after a tanker collided with a drilling platform

However, this was a “highly complex task” and “it may not be successful”, said chief operating officer of BP's exploration and production unit, Doug Suttles.

If the attempt fails the alternative is to drill a “relief well” intersecting the original well, but Mr Suttles warned that this might take months.

BP has also brought in more than 30 clean-up vessels and several aircraft to spray dispersant on the oil floating on the surface.

Bad weather forced the operation to be suspended at the weekend.

The US Coast Guard has described it as a “very serious spill”.

Missing workers
The Deepwater Horizon rig burned for 36 hours before it sank on Thursday in 5,000 ft (1,500m) of water.

It had been carrying out exploratory drilling 84km (52 miles) south-east of Venice, Louisiana, when the blast occurred.

Eleven workers are still missing and presumed to have been killed. The search for them has been called off.

More than 100 other workers were rescued.
An investigation into the cause of the explosion is ongoing.

In 2009, BP was fined a record $87m (£53m) for failing to improve safety conditions following a massive explosion that killed 15 people at its Texas City refinery.

The US Mineral Management Services found no violations on the Deepwater Horizon rig when it carried out routine inspections in February, March and April this year.