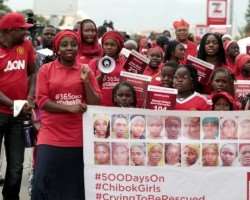 A Nigerian official says a girl suicide bomber arrested in Cameroon is not one of the 276 schoolgirls abducted by Boko Haram from a school in the northeast Nigerian town of Chibok nearly two years ago, but is from a nearby community.

The official says Cameroonian authorities gave them the names of the girl and an older accomplice but are holding them for questioning about how the Islamic extremists operate. The official is in Yaounde, the Cameroonian capital, waiting for the girls to be handed over. He spoke on condition of anonymity because the matter is sensitive.

In Nigeria, Chibok Parents Association chairman Yakubu Nkeki said he is waiting to go to Cameroon to see the child.

She said she was from Chibok and appeared to be about 10 years old. Nkeki’s niece was one of the youngest students abducted from a government boarding school in Chibok. She was 14 at the time of the mass kidnapping in the early hours of April 15, 2014. Dozens of the girls escaped on their own but 219 remain missing.

Boko Haram continues to kidnap even as Nigerian troops have rescued thousands from captivity in recent months. None has been from the Chibok school.