Bukola Saraki Vs Kayode Fayemi: A Nexus Of Corruption 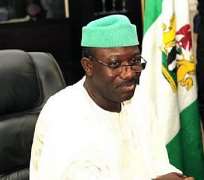 Nigerians are tired of corruption. They are fed up with it. And they are hoping to God that President Mohammadu Buhari would be able to deliver on this front even if he fails on all others. Most Nigerians are eagerly awaiting results. A lot of Nigerians are getting impatient. They are anxious to see some of the national traducers behind bars and all the illegally accumulated wealth forfeited to the country. They are also hoping and praying that President Buhari would be an “equal opportunity warrior” on corruption.

Whether the President and his handlers would be able to live up to the expectation as “equal opportunity warriors” on corruption is presently facing big and stiff test. Nigerians who are currently expressing concerns whether the President would be fair and impartial in his war against corruption are being unsettled by the integrity of some of the cabinet members. They are worried if at the end of the day, the President would not look insincere and duplicitous in his war on corruption. They are concerned if the inability to hold members of his cabinet or members of his party accountable would not diminish the credibility of the war on corruption.

“Senator” Bukola Saraki as we all know is an alleged certified bank robber. Reportedly, he has successfully left at least three banks in ashes. These banks include Socite Generale Bank, Kwara State owned Trade Bank and Intercontinental bank through an alleged collaboration of Mr. Sanusi Lamido Sanusi, the former Governor of Nigeria’s Central Bank. Mr. Sanusi is now sitting on the highly revered stool of Emir of Kano. Mr. Sanusi is also yet to explain what happened to about 640 bilion Naira of the country’s money under him as Central Bank’s governor. “Senator” Saraki also has the reputation of having bankrupted his Kwara State as he allegedly paid off a loan from Guaranty Trust Bank with the State’s resources.

“Senator” Saraki is also waiting to find out whether he would be prosecuted for forgery. He, in collaboration with his good friend and “Deputy Senate President” Ike Ekweremadu has been alleged to have forged the rules of the Senate to get himself and Ekweremadu elected to their present posts. There have been allegations that “Senator” Saraki and his collaborators in the act have been engaged in deliberate act of frustrating the efforts to bring the forgery case to trial. Whether he would be successful or not in this endeavour remained to be seen. Presently, “Senator” Saraki is still battling to convince the world of his innocence of false declaration of assets at the Code of Conduct Tribunal.

The clamour to see Saraki caged has climbed a crescendo. Nigerians want him tried for his transgressions. Nigerians are disgusted that such a character was able to find his way to the highest legislative seat in the country. The optics is too deleterious to be tolerated. The mere thought that an alleged criminal is on that seat is considered obnoxious by most Nigerians who are looking for a way to kneecap corruption in order to save the country. Nigerians are hoping and praying that justice is brought to Saraki for the sake of those who have fallen victims to his kleptomania, alive or dead. If Bukola Saraki should get away and successfully stymied the judicial system as his friend Bola Tinubu did, everyone involved in the process that made such possible would have a lot of explanation to do to Nigerians.

Then there is former Governor of Ekiti State, the handsome and gap-toothed Kayode Fayemi. He is currently the Minister of Solid Minerals in President Buhari’s cabinet. Operatives of the Independent Corrupt Practices and other related offences Commission ICPC, have been in Ekiti State to investigate an alleged misappropriation of over N25 billion by Fayemi’s government. The ICPC team of investigators, which included two men and one woman according to some reports, reviewed some of the projects claimed to have been executed with the N25 billion bond obtained from the capital market by the Fayemi administration.

Some of the contracts being investigated include the following:

c) The construction of Civic Centre awarded to Tiajin-Yuyang Construction Eng. Company Ltd at a sum of N2,573,584,395.75 among others.

Also being investigated is the N852, 936,713.92 State Universal Basic Education Board (SUBEB) counterpart fund, which was withdrawn from the Access Bank account of SUBEB on October 8, 2014, eight days to the end of Fayemi’s tenure. The N852, 936,713.92 was SUBEB Counterpart Fund paid to enable the Board access fund from the Universal Basic Education Commission (UBEC) and the alleged fraudulent withdrawal of the fund from SUBEB account eight days to the end of Fayemi’s government was the reason Ekiti State Government was blacklisted by UBEC. ICPC has expressed interest in the rationale behind the transfer of the N852,936,713.92 into what was called Ekiti State Government Capital Project account and not used to pay SUBEB contractors.

The ICPC team has asked questions from officials in the SUBEB about another set of contracts worth N4, 246,094,751.14 awarded in 2012 through the Bureau of Special Projects (under Governor Fayemi’s office). The contracts were for renovation of schools, supply of school furniture and construction of classrooms. Funds for these projects were taken from SUBEB and Local Governments accounts. Petitions to ICPC alleged that of these contracts, N3, 672,078,820.14 were for renovation of schools alone awarded as follows:

Though, there are appearances of impropriety in the dealings by the Minister of Solid Minerals during his days as governor of Ekiti State as explained above, no one is suggesting that Dr. Fayemi is guilty of any offence as no one has suggested that either Col. Sambo Dasuki or “Senator” Saraki have been guilty of any offence until proven so in any competent court of law. The difference here is that while “Senator” Saraki is already having his day(s) in court after some investigations and Col. Dasuki is still being investigated on some allegations while also having his day(s) in court on other allegations, it is only fair that Dr. Fayemi is investigated thoroughly and be allowed to have his day(s) in court.

For any out-going governor to dip his hands into the commonwealth of his state of whatever variation under any garb or pretence and take out over NGN852 million is beyond the pale. It is a betrayal of trust of the people of Ekiti State. Such an act is tantamount to treason against the Ekiti people. That action, as already pointed out by the Chairman of Universal Basic Education Board, Dr. Yakubu Gambo is a “criminal act” that violated Section 11(2) of UBE Act of 2004. In fact, that this act was committed only eight days to his leaving the office actually makes it reeks to heavens. As a result of this action on the part of Dr. Fayemi, all UBEC/SUBEB 2012 ongoing projects have been halted because Ekiti State has been blacklisted making it impossible for the State to access 2013, 2014 and 2015 Matching Grants running to over NGN2.8 billion.

There is still the issue of Asset Declaration by Dr. Fayemi when he assumed office. There has been speculations that he was not actually worth the amount he claimed he was worth at that point in time, which was over NGN750 million. Those who financed his court cases after he was denied his initial mandate were amazed that he could make such claims. Some are already whispering that he has committed the same sins as “Senator” Saraki and Nigerians are already wondering whether he would ever get his own days in court too. But the fact is that Nigerians do not want speculations. They do not want any sort of whispering.

Nigerians would like to know the facts. Was Governor Fayemi actually worth over N750m in assets on his assumption of office? Also interesting is the fact that when he left office as governor of Ekiti state, he did not declare his assets so that Nigerians would be able to publicly assess for themselves whether he has corruptly enriched himself while in office or not. He has also failed to declare his assets when he assumed office as Minister of Solid Minerals.

Some are now insisting that what is good for the goose should be good for the gander. Some Nigerians are now wondering why the same rules could not be applied across the board by President Buhari and the anti-corruption agencies under him. “Senator” Saraki is being held accountable. Nigerians are happy about it. But Nigerians would be happier if the likes of Fayemi and his ilk are also held accountable too. In this war on corruption, President Buhari cannot afford any form of partiality. He should not engage in nepotism. He has to fight for Nigeria.

Nigeria is bigger than political parties. It is bigger than any friendship. It is either President Buhari fights corruption or not. There is no half way to it. It would be criminal to keep silent on the alleged atrocities of Kayode Fayemi in Ekiti State simply because he is Buhari’s cabinet. Any person or group of persons who engage in criminal silence on these issues is directly contributing to what Harold Laski called “moral paralysis” that is eating out the heart of our society.

The question now remains whether President Buhari would be able to live up to his promise to fight corruption anywhere and everywhere it is smelt. Will Buhari allow the people of Ekiti get justice and give Nigerians the confidence that this war on corruption is not just directed at a group of people? Is Buhari really sincere about helping Nigeria out in cleansing the Augean stable of corruption? Will President Buhari allow the process to work and let Dr. Fayemi be probed and thoroughly investigated to give confidence to Nigeria? Or Will President Buhari continue to be selective in this war on corruption? Nigerians are eagerly waiting to find out!