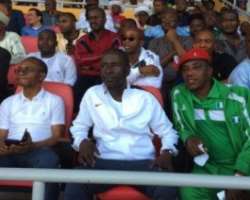 Kaduna city is agog over reports that Governor Nasir El-Rufai and his Deputy, Architect Barnabas Bala Bantex exchanged slaps after a heated debate over the policy directions of the 10-month old administration.

The exchange of slaps was said to have happened at the weekly state executive council meeting at Sir Ibrahim Kashim House. The story peddlers did not indicate when exactly this happened.

There has been no official confirmation of the quarrel, but the story has gone viral on Facebook, and other online social media platforms.

The two most senior politicians in the state were said to be sorely divided over El-Rufai's planned sack of senior civil servants, religious preaching bill and the demolition of Gbagyi villa, a sprawling residential area, that his government had planned to demolish, but for a court order.

To be sure, some people found the story incredible, but cynics said there could be “No smoke without fire”.

Some others said the story was purely concocted to further tarnish the image of Governor El-Rufai, whose popularity is dwindling over harsh , controversial and “anti people ” decisions taken in recent time.

Kaduna residents are meanwhile waiting for their governor to confirm or debunk the story spreading like wild fire.

A Government House source however dismissed the story as untrue and a figment of the imagination of the originators.

The source said it should be disregarded.
What is giving some measure of credibility to the story was the alleged strained relationship between El-Rufai and Bantex.

The two politicians are said to be diametrically opposed over several issues.

And what caused the counter-slapping drama started after Bantex at a meeting of the SEC meeting objected to the proposed sack of top civil servants, 70% who come from Southern Kaduna.

An argument ensued to the extent that El-Rufai walked up to Bantex and slapped him on the face. Bantex, the report goes, took his vengeance outside the meeting hall and slapped back El-Rufai.

The deputy governor was said to have caught Governor Elrufai unawares, as he landed his own slap several times, pinned him down before landing another slap on the governor. Cabinet members rushed to separate the two men.

All efforts to contact the Special Adviser on Media and Communication, Muyiwa Adekeye on phone on Saturday failed as he refused to pick his call .

The call was put to to him at about 10 am and our correspondent waited to get his response, before filing the story but still didn't get back , hence the story was filed at about 2:30pm.