Our minds are now focused on Alexandria game: Amuzie 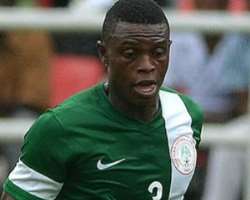 Super Eagles left back Stanley Amuzie has apologised to Nigerian football fans after the 1-1 draw with Egypt in a 2017 Africa Cup of Nations qualifier in Kaduna on Friday.

Nigeria conceded in added time of the second half to draw the game which was well within their sights to win.

Oghenekaro Etebo had given Nigeria the lead in the 62nd minute of the game for his first goal at full international level in his first start.

Mohammed Salah equalised for Egypt in added time to give the Pharaohs a share of the spoils which left Amuzie disappointed.

“I want to apologise to our fans for the draw. I appreciate that they came out in their thousands to support us but we couldn't get the win we wanted,”the Olhanense left back told supersport.com

“The team is gutted I must tell you. We wanted to win for ourselves and the fans but it wasn't to be. It wasn't what we wanted or expected.

The defender, who was also making his first senior start also stated that he has moved on from Friday's draw and has his eyes firmly fixed on the second leg in Alexandria on Tuesday.

“I can't afford to dwell on Friday's game because our minds are now on the second leg because that is what is important now,”he revealed.

“We are already looking forward to the game because we have another chance to get the three points at stake.

“Egypt are a good side as they showed but we are also good. If they can get a draw here I see no reason why we can't get points over there.

“The team is determined to make Nigeria proud and we are heading to Egypt for business. I want the fans to continue to support the team.”Amuzie added.