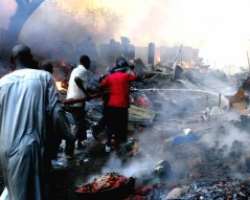 The Sabon Gari market inKano Northwest Nigeria was gutted by fire in the early hour of Friday, with properties worth millions of naira destroyed.

The cause of the fire has not been ascertained
According to witnesses, the fire started around the Sani Abacha Mosque where books and other items are sold, before spreading to Gidan Magge.

Fire service personnel were said to have arrived at the scene of the fire owing to the difficulty in accessing the market, and when they eventually got to the scene, there was not enough water to put out the fire.

According to him,  the fire which started at the footwear section of the market at about 1am and had destroyed several shops in the market.

“Our men are still trying to put out the fire as I am talking to you now we are in the market”, he said. This is the second time in five months that the Sabon Gari market was gutted by fire.