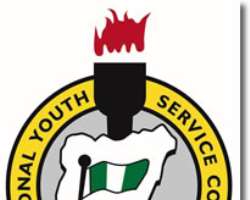 The Director-General (DG), National Youth Service Corp (NYSC), Brigadier General Johnson Olwumi has expressed shock over the sudden death of Samuel Chukwudumebi Okonta, who was attacked among two other members of the scheme after successfully partaking in the Rivers State re-run elections last weekend.

Brig. Gen. Olawumi who was accompanied to the family house of the deceased Corp member by the management team of the scheme in Delta State headed by the state coordinator, Mrs. Olive Etukudo on Easter Friday afternoon said it was sad that the NYSC was at the house of late Chukwudumebi at such a time.

“It is so sad because as a scheme, we have always been working towards ensuring the safety and security of Corp members not even for electoral duties alone but throughout the service year. Unfortunately, for this young man he was cut down in the course of national service, in the course of carrying out electoral duties to help to strengthen elections and democracy in Nigeria and contributing his quota to the development of this great country”.

According to the DG, the slain Dumebi conducted himself with great respect, “in fact, in the day of the election, he conducted himself well, everything went well in his station, there was no complaint whatsoever about his conduct and at the end of the election that day, he went back, submitted his paper happy that he has contributed his quota to the success of that election and unknown that some hoodlums were still locking around in the night and they attacked three of them and unfortunately we lost him”.

The NYSC boss seized the privilege to call on Nigerians to see Corp members posted to them as their own children, brothers and sisters as some of them went through hard times to finish their higher education, “some of them have people waiting readily to depend on them and it is not in the best interest of any family, community or the nation that violence should be offered to them. I want to seize this opportunity to call on all Nigerians in every nook and cranny that when you see these young men and women who are out on national duty, support them because as you have them in your own community, you also have your children, brothers and sisters serving elsewhere and you will not be happy if they offer violence against them wherever they are”, he cautioned.

He said, “we will make sure that we hunt all those who are responsible for cutting down this young man, we will make sure that we mobilize the security agencies and we will do everything within our powers to make sure that those people are apprehended and they will face the full wrath of the law”, noting that after the post mortem which was directed by the governor of Rivers State, Nyesom Wike, the scheme would be back to give Dumebi a befitting burial.

In his condolence message to the deceased who studied political science at the Ambrose Alli University, Ekpoma, Edo State, the DG said, “It is so sad that you were cut down in the process of serving your nation. Myself, the entire management and staff as well as all members of the corps nationwide are deeply grieved by your death.

“I promise that I will not relent until we ensure that those who keep you permanently silent forever are brought to book. Adieu Samuel and RIP.”

Responding on behalf of the family, Chief Chikwenye Maduka, thanked the DG for deeming it fit to come in person to sympathize with the family and the community in general, “when this kind of thing happened, it is received with very deep remorse and sadness and we feel the lost very heavily particularly this family because they had put in so much to bring their child to that level, he prayed that the soul of Dumebi would rest in perfect peace in the bosom of the Lord.

Meanwhile, the eldest sister to Chukwudumebi, Mrs. Victoria Akpu, said the news of her younger brother’s death was a shock to the family especially to her who raised him up after their parents’ death, “this is not what we desired. I talked with him last week Thursday, he promised he will come back after the election but to my greatest surprise I never knew that it was the Rivers State election that he will end the journey of his life. They stabbed my heart and they have killed me”, she wailed.

Mrs. Akpu revealed that their father died in 1993 while their mother passed on in 2012 January 10th and that the deceased was the eight among nine children and was born January 6, 1985 in Illah “Since that time, I have been taking care of them all in one room in Lagos. No relation, everybody ran away”.

Eulogizing the person of his brother, she said, “My late brother was a God fearing person, very humble, respectful and hard-working”, noting that he does any meaningful job to earn a living.

The NYSC DG also visited the traditional ruler of Illah, Obi ‎Akazue Gbemudu II, the Ogbelani of Illah, where the DG praised the prevailing peace in the town as they were received peacefully by the people.

The DG later told corps members serving in the community not to be deterred by the circumstances of Samuel Okonta’s death in the discharge of their national assignment.