AFCON 2017: Eagles can win in Egypt despite Kaduna draw – Siasia 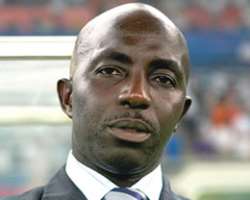 Super Eagles' Interim Coach Samson Siasia on Friday in Kaduna said his team would now be aiming to beat the Pharaohs of Egypt when both teams meet on Tuesday.

Siasia who said this during a post-match briefing at the Ahmadu Bello Stadium, following his team's 1-1 draw with the Pharaohs, said his team could win the return leg match.

The return leg match of the 2017 Africa Cup of Nations (AFCON) Qualifying Group G fixture holds in Alexandria on Tuesday.

The Eagles handler, however, said the team's technical crew would correct the lapses noticed in the match in Kaduna before the reverse fixture in Alexandria on Tuesday.

He said the Eagles played well but the technical crew needed to make some corrections before their next match in Egypt.

“We will try to see what went wrong and do a proper check before playing our next match so that we can win in Egypt.

“The players did well but I don’t know what went wrong in the last three minutes when the Egyptians equalised. That is football for you.

“A game can end up in a draw or loss even when you play well. However, we should have been marking in the last three minutes, but it turned out the other way.

“With the outcome of the match, we will try our best to win in Egypt, because in football everything is possible.

“We cannot move backwards but forward. We are going to pull ourselves together and see how we are going to win the match,'' Siasia said.

He pointed out that his players were tactically better than the Egyptians in the game for the greater part of the encounter.

A late equaliser by Mohamed Salah denied the Super Eagles the chance of moving to the top of Group G in the African Cup of Nations qualification.

The Super were forced to play a 1-1 draw when Salah slotted home a fine pass from Ramadan to cancel out Oghenekaro Etebo's goal.

The draw meant Egypt stay on top of Group G with seven points from three matches and host Nigeria in a reverse fixture in Alexandria on Tuesday.

Nigeria are second with five points with Tanzania on four points.

Only the overall group winners are guaranteed automatic passage to the final tournament in Gabon next year.

Oghenekaro Etebo put Nigeria ahead on the hour, when he scrambled home off a rebound after Kelechi Iheanacho's shot came off the post.

However, in stoppage time, Mohammed Salah sprung an offside trap by the home team to draw Egypt level.

Nigeria bossed possession after a bright start to the game, but Egypt threatened on the counter.

Super Eagles goalkeeper Carl Ikeme pulled off the first big save of the day when he put out his foot to block a goal-bound effort by Ahmed Hassan 'Kouka' after 18 minutes.

Egypt goalkeeper Ahmed El-Shennawi was also at his best in the closing moments of the half when he turned away a low, goal-bound shot by Kelechi Iheancho in the 45th minute.

In stoppage time, Odion Ighalo failed to direct his shot from inside the box with the Egypt defence at his mercy.

Nigeria continued to attack after the interval with coach Samson Siasia giving Arsenal youngster Alex Iwobi his first official game for the Eagles late on.

Ikeme was forced to make another big save after 65 minutes as Egypt chased for an equaliser.

In the 72nd minute, Ahmed Musa was denied by El-Shennawi, who kept out a goal-bound shot by the CSA Moscow star.

Six minutes from time, Victor Moses went clean on goal but his shot was cleared off the goal line by Hamada Tolba.

And just when Nigeria thought they had shaded this contest, Salah stole in draw Egypt level at the death. - NAN/Guardian.