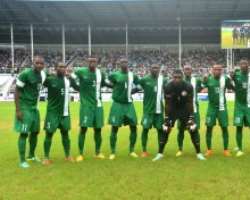 Nigeria U23 defeated hosts Brazil 1-0 in an international friendly played at the Estádio Kléber Andrade on Friday morning.

The much talked about encounter described as a repeat of the Atlanta 1996 Olympics football event began on a positive note for the African U23 champions after taking the lead as early as the third minute after Akwa United’s Ekpai tucked home a rebound.

Gabigol , Alisson and Felipe Anderson had at least two chances to win the game for Seleção Brasileira but consistent misses denied them victory plus excellent goalkeeping from Nigeria’s Emmanuel Daniel.

With coach Micale’s introduction of Clayton, Doria , Luciano and Malcom , the Dream Team VI backline was placed under constant check – but the hosts failed to convert begging chances.