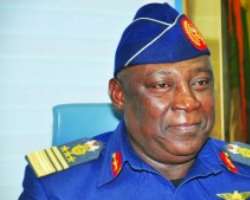 A former Director of Finance and Account of the Nigerian Air Force, Air Commodore Aliyu Yishau (retd),‎ told a Federal High Court in Abuja on Thursday that a former Chief of Air Staff, Air Chief Marshal Alex Badeh (retd.), inherited from his predecessors,  the tradition of diverting N558,200,000 from NAF's account‎ monthly.

The ‎Economic and Financial Crimes Commission's witness who served as Director of Finance and Account of NAF under the two regimes of Umar and Badeh as the Chiefs of Air Staff, made the disclosure while being cross-examined by Badeh's lawyer, Chief Akin Olujinmi (SAN).‎

However, Yishau who had in his evidence-in-chief narrated how he helped Badeh to divert the sum of N558.2m monthly and used part of the funds to acquire landed assets in many parts of Abuja, said he would not know how the funds were used under the administrations preceding Umar's.‎

‎‎”He (Umar) was aware of it and he controlled the expenditure from the balance of N558,200

“The practice of setting aside the N558, 200 had been there before I was became the‎

Director of Finance and Account of the Nigerian Air Force.‎

“I did not know how the previous administrations before Air Chief Marshal Umar were using the money.”

Responding to a question, Yishau said  he never specifically advise Badeh on the N558.2m which was usually set aside fof “General Administration of the Chief of Air Staff” when Badeh newly assumed office.‎

‎In his response to another question, Yishau said‎
Badeh became the Chief of Air Staff in September 2012, but Olujinmi faulted the claim saying his client was actualy‎ appointed on October 4, 2012 but took office on October 8, 2012.

‎‎As of the time of filing this report at about 5pm on Thursday, Badeh's lawyers were in the process of getting the trial judge, Justice Okon Abang, sign his release warrant from prison.

The judge had earlier on Thursday removed the aspect of the order granting bail to Badeh ‎dealing with the requirement of the EFCC to verify the property to be presented by Badeh's proposed sureties.

Badeh had been remanded in prison since his arraigment on March 7.