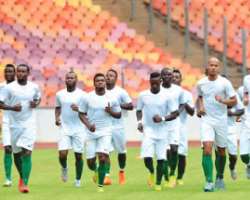 The News Agency of Nigeria (NAN) reports that the Eagles camp boosted with the early arrival of the players marks a clear departure of what it used to be in the past.

Ibitoye noted that the importance of the game to the country accounted for the players' early arrival.

“We are having the first training session with 20 players already in camp, and I am sure that by now the rest would have arrived.

“They promised to come by first flight today (Tuesday) and by now they should have arrived at our camp to be picked up later for the afternoon session.

“The players in camp are ready for the match against the Egyptians and we have no injury concern; the mood in the camp is very good and highly competitive.

“We have a healthy rivalry between the players; the coaches are doing a lot of work putting the players in good shape for the match,'' he told NAN on telephone.

Ibitoye also disclosed that the coach would decide who will have the first team shirt and not necessarily determined by the time each player arrived in camp.

“The decision about who will play first will be determined by the coach on Friday but I will appeal to Nigerians for their support.

“I can only appeal to Nigerians to be praying for us and support the team. Those in Kaduna and its environs coming to stadium should dress in national colours,'' he added.

NAN reports that so far, 20 foreign-based players have reported to the Abuja Eagles' Bolton White apartment camp to join the home-based for the qualifier.

The Eagles will first host to the two-legged encounter at the Ahmadu Bello Stadium, Kaduna in a must win match for the 2017 AFCON qualifier.

The second leg will be played four days later in Egypt. Nigeria is second in Group G with four points after a 2-0 win over Chad in Kaduna and a goalless draw with Taifa Stars of Tanzania in Dar es Salaam.

Egypt on the other side sits atop the log with six points after they started with a 3-0 win over Tanzania and 5-1 bashing of Chad in N'Djamena.

A win for any of the two teams will boost its qualification for the tournament in Gabon next year. (NAN)