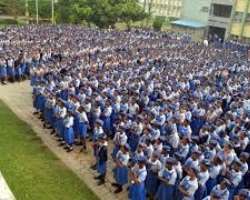 Students and workers of Queens College, Lagos on protested what they termed the sexual harassment of a female JSS2 student in the school last month by a male teacher, Olaseni Oshifala.

Oshifala is a Biology teachers in the school.
Stakeholders in the school are divided about what should be the fate of the accused teacher. While some believe that the school needs to take immediate action against the teacher to nip such evil seed on the bud, others are lining behind the teacher whom they believe could not do such thing.

According to reports, the management of the school has thrown its weight behind Oshifala‎, who was accused by a parent, Chinenye Okoye, of forcefully trying to kiss and touch the private parts of her daughter, a JSS 2 pupil.

The story, which was published on a blog, has led to the call for the sacking of the teacher.

However, there are those who believe that is not the right way to go.

On Monday, there was a protest in the school.
The protesters blocked the entrance to the school and caused gridlock for hours on Onike Road, Sabo, Yaba, where the school is situated.

Placards borne by the protesters included: Leave Osifala alone. He is a man of integrity; No Osifala, No Biology Examination; Osifala Olaseni is our good teacher.

Okoye alleged the teacher cornered her daughter on her way back from relieving herself.

She said: “She started screaming and then students started coming out so he left her and pretended to punish her.”

Premium Times reported that the school’s principal, Lami Amodu,  had in a statement on its website said the claims was an attempt to ridicule, not just Mr Olaseni, but the “hard-earned reputation” of Queens College. (We later realised that the so-called statement was adapted from a series of interviews blogger Mike Ile had with college officials . It was later deleted).

“When I resumed work as principal here, I was told of a certain matron who housed a person that had attempted to have an affair with a student,” Mrs. Amodu began.

“I was not here when it happened but as soon as I was told, I made sure that the matron was moved out of the school premises. I have zero tolerance for such behaviour. I have a daughter who schools here, even before I began work here. I will not take chances.

“As I talk to you, no single parent has come to me or any of my Vice-Principals to report Olaseni as a molester. I assure you that if the allegation was true, other parents would have been buzzing our lines non-stop. Children spread gossip fast. They would tell their parents or relations, if anyone was molesting them here. No parent would take such news lightly.