5 reasons she hates your semen 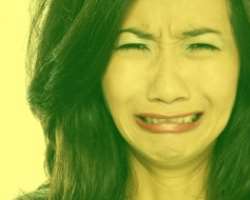 If your partner isn't exactly enthusiastic about your semen, there's not much you can say to change her mind.

Sure, you can cite scientific research, like the 2012 study from the State University of New York, which found that seminal fluid contains chemicals that can actually elevate a person's mood.

But try telling a partner that your sperm is like an anti-depressant and see how far it gets you. Yeah, no dice.

There is something you can do about it, though. And many of the solutions are as simple as a small, healthy lifestyle change.

Here are 5 of the most common complaints that women have about their partners' semen, and what can be done about it.

“It was like I was getting water-boarded,” says Joyce, 39, painting an extremely vivid image of her partner's ejaculate. “It was too much.”

Dr. Jesse Mills, MD, an urologist at UCLA, says a heavy load can happen when you haven't ejaculated in awhile.

The fix is simple and quite fun: Try ejaculating more often—with and without her.

Too Little Sperm
Tracy, 23, has the opposite complaint about her boyfriend.

“Hardly anything came out when he came,” she says. “I couldn't see it in the condom, so I thought he faked it. Then when I saw semen was there, I was confused why it was so little. It dribbled out sadly.”

Hydration can affect the consistency of ejaculate as well.

“If he's dehydrated or hasn't ejaculated in a while, then he's going to have a thicker, more chunky consistency,” says Dr. Mills.

Brian Steixner, MD, the director of the Institute for Men's Health at Jersey Urology Group, says a little chunky sperm is nothing to be concerned about.

“It's normal to have variations in the consistency, amount, taste, and smell of semen,” he says.

How do you know if you're hydrated? Your urine should be the color of lemonade or lighter.

Too Yellow
Semen is typically white or grey-ish, so when Rachel's date ejaculated yellowish semen, she was alarmed.

“I'd never seen anything like it and immediately feared it was an STD,” she says. “He didn't know why it was yellow either, so we got into a tiff about whether he should go to the doctor.”

Dr. Steixner says pale yellow is considered normal, but if it's a darker yellow and combined with a foul odor, it can be a prostate or seminal vesicle infection and you should get checked out by a doctor.

One more caveat: If it's a darker yellow, but it does not smell, then, Dr. Mills says it's mostly likely old sperm stored due to infrequent ejaculations.

Tastes or Smells Weird
“When he came, it smelled like chemicals,” says Laurie, 40. “It was very confusing.”

Laurie's not alone. Many of the women we interview for this story described their partner's ejaculate as smelling like a swimming pool, ammonia, or bleach.

A bad odor is usually accompanied by an unappetizing taste.

As for the smell, Dr. Steixner says this is “absolutely natural. Semen does contain ammonia and other sterile-smelling alkaloids.”

But how to fix the taste? Unfortunately, there's yet to be a scientific study on which foods change the taste of your semen. (Think about it: Who would sign up for that taste-test?)

There is anecdotal evidence, however, and many doctors, including sexologist Dr. Ava Cadell, believe in the “you are what you eat” theory.

“Certain herbs and spices such as cinnamon, nutmeg, parsley and wheatgrass can make semen taste better, and smokers and caffeine drinkers taste more bitter than non-smokers who drink a lot of water.”

Dr. Mills agrees, in theory.
“What you eat will eventually make it into your semen, so this does make sense, especially with foods like garlic that excrete through your pores,” he says.