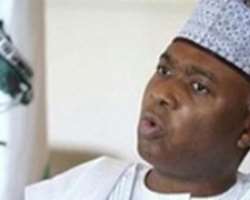 The embattled Senate President, Dr. Bukola Saraki, yesterday, adduced reasons     the 13-count criminal charge the Federal Government preferred against him before the Code of Conduct Tribunal, CCT, in Abuja, should be quashed.

Saraki, who was alleged to have falsified the assets he declared while in office as the Governor of Kwara State from 2003 to 2011, insisted that the allegations levelled against him were not different from the ones that were also slammed against the erstwhile governor of Lagos state and national leader of the All Progressives Congress, APC, Asiwaju Ahmed Bola Tinubu.

In a motion he argued through his lead counsel, Chief Kanu Agabi, SAN, Saraki, urged the Justice Danladi Umar-led CCT panel to go ahead and discharge him the same way it did for Tinubu.

He noted that Tinubu was freed on the premise that FG failed to fulfil necessary condition precedents capable of conferring jurisdiction on the tribunal to hear the substantive charge against the defendant. Vanguard.