Wizkid Spite Fire!! On Those Attacking him for Buying US Mansion 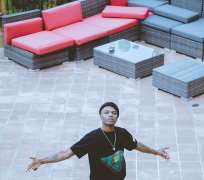 Like him or hate, STAR BOY record label owner, Wizkid, is seriously making his family proud and his babies with his babymamas.

Recently, it the news of the singer acquiring a mansion in the US went viral accompanied with pictures as proof as he was seen having a nice relaxation time in his new home.

Though, not many of his fans were happy with this development as many criticized him and some Nigerian entertainers who make their living in Nigeria and then take the money abroad to acquire properties.

Rather than get worried about his fans opinion, the singer has come out to state that he has been working hard without making noise and it's time for God's favour over his life.

“Working hard in silence! Let the favor of the Lord our God be upon us, and establish the work of our hands!! Starboy to the world!” he said.