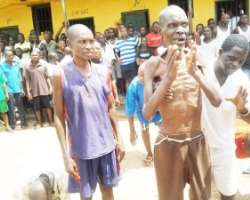 Succour came the way of some prisoners as the Kaduna State Chief Judge, Justice Tanimu Zailani, on Wednesday released 56 inmates from the Kaduna Central Prison as part of efforts to decongest prisons in the state.

The judge did not mince words as he attributed the high number of inmates to the failure of judges to be fair and just in the discharge of their duties.

He emphasized that only justice would prevent the current situation where people were sent to jail for trivial offences.

“Most of the prisoners are in prison for simple theft, but were branded with armed robbery just to keep them in prison.

“As judges, we are supposed to be professionals and should not be found truncating justice in whatever guise. We are expected to uphold justice and that is what we must do.

“For those with offence of court contempt, you can punish the offenders right there in the court. There is no need putting them in jail, “he said.

Giving further insight on those released, Zailani explained that they were first time offenders arrested for non capital offences, those unable to meet their bail conditions, and those whose case records were neither with the Ministry of Justice nor the Police.