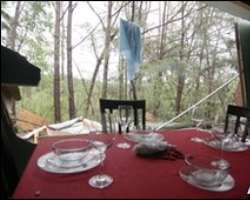 Witness: It sounded like the house was going to explode

A tornado has hit the south-eastern US state of Mississippi, killing at least 10 people, including children.

There was “utter obliteration” in Yazoo County, where three people died, the state governor said. A state of emergency was declared in 17 counties.

A church in Yazoo City was flattened and houses reduced to rubble. The nearby states of Louisiana, Arkansas and Alabama were also hit by tornadoes.

Officials fear the death toll may rise as more debris is cleared.

The National Guard has been deployed to help in the search and rescue operation.

Powerlines have been blown down and roads are blocked by fallen trees after a tornado estimated to be almost a mile (1.6 km) wide blew through the centre of Mississippi.

Meteorologists put wind speeds at about 150 miles per hour (240kph).

The storms brought heavy rain to some areas.
Five people died in Choctaw County – two of them children – while four of the other deaths were in Yazoo County and one was in Holmes County.

Four injured people were flown by helicopter from Yazoo County to hospital in the state capital, Jackson, for treatment.

Looking everywhere
“It sounded like a train coming down that road,” said Malcolm Gordon, 63.

He hid in a cupboard with his wife, Diane, while the tornado took the roof off his house.

“I'll just bulldoze what's left and start over,” he said.

Kenneth Gurley, of Warren County, said: “When I got up, the windows started blowing out and it blew me from one room to the next room.

“I grabbed my son, we got on the floor, and next thing I know the roof come off, all the windows were blowed out, the house started flooding with water.”

“There are lots of places where a person can get blown off the road,” said Mississipi Governor Haley Barbour.

“And so we've got a lot of volunteers, as well as professional people from the local fire departments who are just trying to run through there and look everywhere to make sure we don't miss anybody.”