FACEBOOK’S BID TO RULE THE WEB AS IT GOES SOCIAL 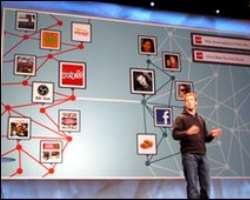 Facebook set out its stall to unseat Google and be at the heart of the web experience as it becomes more social.

The world's largest social network unveiled a series of products at its developer conference F8 aimed at helping the company achieve that goal.

These tools will make it easier for users to take their friends with them as they browse the web.

“We are building toward a web where the default is social,” said Mark Zuckerberg, Facebook's founder.

“If you look back a few years ago and even as recently as today, in most cases the web isn't designed to use your friends. They don't assume you have a real identity but we are seeing that seep in more and more.

“We want to be one of the things that empowers that and right now most users are using Facebook and we hope we can be a good force in driving that forward,” Mr Zuckerberg told the BBC during a news conference.


FACEBOOK FACTS
More than 400 million active users
Average user has 130 friends
70% of users outside the US
Read more at dot.Maggie http://www.bbc.co.uk/blogs/thereporters/maggieshiels/2010/04/facebook_v_google_for_web_cont.html

He added that the “web was at a turning point” and that the way forward was to have friends, or what Mr Zuckerberg called “your social graph”, to guide you online.

“One of the points Mr Zuckerberg was making was that the web has become a lot less anonymous and Facebook is definitely positioning itself as wanting to be the owner of that information,” said Maya Baratz of the Huffington Post.

Personalisation
At the F8 conference in San Francisco, Mr Zuckerberg unveiled a number of products aimed at putting users and their friends at the “centre of the web”.

The most significant was an open graph protocol to let publishers tag their content by type along with a “Like” button that partner sites put on their webpage. This allows users to indicate what they like on a website, be it from photographs to news items and from clothes to music.

That information will then be stored by Facebook the way it already stores connections between people. At the same time any website will be able to take those individual preferences and use them to tailor a more “personalised online experience” for the user and their friends.

Facebook said this means its members will see a web that caters to their individual tastes.

Crucially all this can only happen when users are logged into Facebook and “makes it easy to make any page (on the internet) a Facebook page,” said Bret Taylor, Facebook's director of platform.

Business opportunity
Mr Zuckerberg described the features he presented at the conference as “the most transformative thing we've ever done for the web”.

Justin Smith, founder of InsideFacebook.com said there are a lot of business upsides to this product.

“When someone “likes” your page, that is a valuable action because it means you will be able to publish updates directly to them in the future which could be used for a variety of purposes like promoting traffic to your website or advertising anything you want.”

Some of the early adoptees of the “Like” button include CNN, the movie site IMDb.com, ESPN and Levi's.

Levi's will integrate the “Like” function on its e-commerce site as well as build a “friend” store where consumers logged into Facebook will be able to see a list of their friend's favourite products and shop online with them.

'Audacious and a bit scary'
So what does this mean for Google, the world's most powerful internet company with billions of users who access the web using hyperlinks?

“People are discovering information not just through links to web pages but also from the people and the things they care about,” Mr Zuckerberg told a conference hall of around 1,500 developers.

Om Malik, founder and editor of the technology blog GigaOM.com told BBC news “even a blind man can see this is a Facebook versus Google battle and in many ways if the web is going to be more social then that plays to Facebook's strengths.”

“Facebook has won the internet,” he told technology blog ZDnet.com

“Facebook has always been social, but in terms of dominating the web over Google they have made strides today.”

But Mr Malik sounded a note of caution.
“The whole idea to socialise the whole web is fairly impressive, audacious and a bit scary. I am very scared about the privacy issues around this initiative. They haven't really been very clear as to how consumers will have more control over the things they do on the web.”

The issue of privacy has been something of a thorn in Facebook's side. It has suffered backlashes in the past over moves to change users privacy settings.

“Nothing we have released changes any of the privacy protections we have,” said Elliot Schrage, the company's vice president of public policy and communications.

“We're providing new opportunities for people to have a social experience if they want it.”