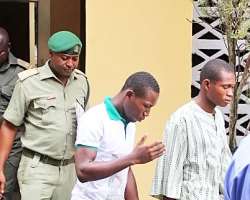 BEVERLY HILLS, March 14, (THEWILL) – Prosecutors of Yunusa Dahiru, alleged abductor of Ese Oruru, at a Federal High Court in Yenagoa, on Monday, requested the judge to take evidence from the victim behind closed doors.

Dahiru was on March 8, 2016 charged with abduction, kidnapping, unlawful carnal knowledge and sexual exploitation by the Police but had pleaded not guilty to all the charges leveled against him.

Mr Kenneth Dika, prosecution counsel, who made the oral application before Justice H. A. Nganjiwa noted that the victim, 14 year old Ese Oruru, was a minor and deserved the protection of the court.

Counsel to Dahiru, Mr Kayode Olaoshebikan however opposed the application but urged the court to rule on the pending bail application for Dahiru which was filed on March 8, 2016.

However, Dika opposed the bail application and argued that the accused, who was not resident within the court's jurisdiction, is likely to jump bail.

He however ruled that the accused should be remanded in prison custody till March 14, 2016 when he will rule on the bail application.