How GOP created the 'monster' Trump that is threatening to consume it: Obama 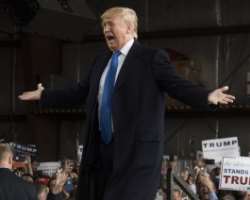 The violence that erupted between protesters and supporters of Donald Trump may have come as a shock to some, but to President Barack Obama, it was only a matter of time. Speaking at a Democratic National Committee event in Austin on Friday, Obama issued a spot-on assessment of Trump’s popularity and the Republican Party’s role in his success.

Hours before the Republican presidential frontrunner was forced to cancel a campaign rally in Chicago after hostilities between his supporters and anti-Trump demonstrators boiled over into violent physical clashes both inside and outside the Chicago Pavilion, Obama said the GOP had no one to blame but itself for Trump’s hijacking of the presidential primary. “What is happening in this primary is just a distillation of what's been happening inside their party for more than a decade,” the president said. Obama hits the nail on the head in his assessment that Trump has merely capitalized on tactics of polarization and fear-mongering fostered in recent years by the Republican establishment.

Much of Trump’s popularity among voters can be traced to the fiery and divisive “us-versus-them” rhetoric he employs at rallies, words that certainly aren’t new or unique to Republican politicians in recent years. Many have aggressively pushed partisan politics throughout all of Obama’s

As Dan Balz notes for the Washington Post, “The sight of establishment Republicans recoiling at Trump strikes some analysts, particularly on the left, as ironic.” According to Balz, Trump easily found favor among the party’s voter base because the GOP leadership has long sought to widen the divide between the two parties. Republicans’ efforts to discredit the Obama administration laid the groundwork for the anger and discontent that are now drawing voters to Trump. “Having sown the wind, the argument goes, the party now reaps the whirlwind,” Balz writes.

On Friday, Obama said he wasn’t shocked Trump managed to secure frontrunner status in the Republican primary and argued GOP leaders shouldn’t be either. “The reason that many of their voters are responding is because this is what's been fed through the messages they've been sending for a long time — that you just make flat assertions that don't comport with the facts,” he said. Obama further said the Republican establishment first nurtured the ideology Trump operates under, which he characterized as believing “that compromise is a betrayal. That the other side isn't simply wrong, or we just disagree, we want to take a different approach, but the other side is destroying the country, or treasonous