IT'S BLACKMAIL BY MY ENEMIES â€“ TOPE ALABI, GOSPEL MUSICIAN 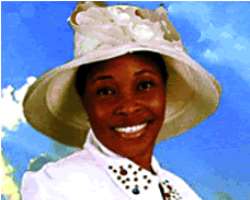 Tope Alabi
Ace Yoruba gospel musician, Tope Alabi, and former producer of her hit album, Angeli Mi, are at daggers drawn over the production of the video of the same album.

The producer, Alhaji Tajudeen Bioku, who is president/chief executive officer of United States-based NPC Audio Records, has petitioned the Special Fraud Unit (SFU), Ikoyi, Lagos, alleging that Alabi defrauded him for failing to continue with the contract to record a video of the hit album.

Alabi, on her part, insists Bioku still owes her part of the amount agreed to finish the work hence her refusal to continue with the contract.

On April 8, 2010, an online medium, The Owls, had slammed a news item on the nigeriafilm.com website claiming that Alabi was running from the police after failing to honour several invitations by the SFU to defend herself on the allegation of fraud leveled against her by Bioku.

But, Alabi, in an exclusive interview, dismissed the allegation, saying she never ran away from the police and that it was a grand design to blackmail her.

Her words: 'I have no reason to defraud anybody as a preacher of the Gospel contrary to the campaign of calumny being mischievously displayed on the internet. I have gone too far to compromise faith on the altar of mundane things of this world.

'That premature publication exposes the evil intention of my enemies who have vowed to stop at nothing to rubbish the good work of an innocent personality like me. It is an aberration for anybody irrespective of status to prejudice the police investigation. This attitude is less than salutary as it smacks of deliberate wickedness, especially when the last has not been said by the investigating officers at SFU.

'I do not have to join issues with Alhaji Bioku on the legal implication of his character assassinating publication, devised towards lowering my integrity in the estimation of right thinking men since I have handed that over to our lawyers for instant action.' Alabi, who confirmed that there was actually a transaction between her and Bioku, also revealed what transpired between them.

'I knew Alhaji Bioku through a woman who called as my fan and linked me to him. The truth of the matter is that sometime in 2007, (he) came under the name NPC Records Audioworks and approached us, Tope Alabi Gospel Vibes, for the release of one album, which was done then and handed over to him without wasting time.

'We did Angeli Mi for him under certain conditions.

NPC Records was to pay the sum of $20,000 to Tope Alabi Gospel Vibes but when we could not get the money by cash or money transfer, we instructed Alhaji Bioku to convert part of the money into purchase and shipping of studio equipment to augment and or fortify our existing studio. (He) acted accordingly by sending equipment worth $9,600 and we spent the sum of N142,000 to clear the goods on arrival. In other words, Bioku is the one still owing us the sum of $10,400, which he has refused to pay despite several demands, for reasons best known to him.

'During the process of the aborted trip, Bioku collected money from some people he promised to take along with us. Those people paid N850,000, which he collected and immediately disappeared, leaving me to refund them the money in order to savage the image of the band. Evidence of such refund are available.'

Asked about the police invitation, Alabi said: 'It is a fallacy of unwarranted assumption for any right-thinking person to conclude hastily that since I did not appear at SFU when I was called, I was then running away. Such conclusion is unfounded, premature, misguided and misleading. When the Assistant Commissioner of Police at SFU called me on phone, I was then busy at one location or the other for the video recording of my latest album, Mori Yanu. I did show up at the SFU and I have written my own statement about the whole issue. The SFU is currently investigating the issue. I have hired my own lawyer because I'm suing Bioku for libel.'

Public Relations Officer of the SFU, DSP James Sarki, confirmed during a visit to his office in Ikoyi that Alabi had reported and has written her statement on the matter.

Bioku's response
'I met Tope Alabi in 2005. And then I wanted to do business with her because I really admire her as a great talent and one that I could use to expand my business of promoting music. We agreed on a deal for the audio recording and video shooting of the album, Angeli Mi, but she has not fulfilled all our agreement. When I discovered that she was dribbling me, I reported to the SFU. Personally I don't have anything her but I discovered that she has one big problem, which is that she lies a lot.'

Bioku also denied Alabi's allegation that he had wanted to play smart with her by going behind her to meet one Mr Anayo, who he allegedly commissioned to produce the disputed album on video and pay the whole money into his account without meeting with the artiste ( Alabi).

'That is not true. She is the one trying to dribble me. I am waiting for her in court but if Tope Alabi wants the matter settled amicably, she has to fulfill our agreement, which is to do the video recording of Angeli Mi and its tour round the U.S. This has been our pact from the beginning,' he added.